During his address in Upington, the president explained why he wanted to focus on language this Heritage Day, and for Heritage month. 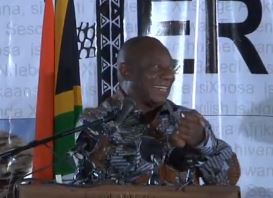 President Cyril Ramaphosa has encouraged South Africans to embrace their heritage, emphasising that every language spoken in the country has equal worth.

Ramaphosa paid a visit to Sandile Present Community Library in Upington where he was read to by pupils in indigenous African languages, including the N|uu and Nama languages.

The session was lead by Katrina Esau, affectionately referred to as Ouma Geelmeid, a recipient of the 2014 National Order Baobab in Silver for her work in heritage preservation.

Ramaphosa then addressed hundreds of people at the Mxolisi Jacobs Stadium in the Northern Cape for the 2019 National Heritage Day Commemoration.

During his address, he explained why he wanted to focus on language this Heritage Day, and for Heritage month.

“The UN has declared 2019 to be the year of indigenous languages, and this year heritage month is focused on elevating all our languages and to see that there are more widely spoken and read,” he said.

“Language… speaks to your identity as a person as South Africans. It helps us understand where we come from and anchors us and our children in the present.”

He praised the country for its diversity with languages, cultures and traditions.

He explained that under apartheid and during the years of colonialism, African languages were denigrated while African communities were divided to ensure histories were forgotten.

In a bid to ensure this, Ramaphosa said, the Nama language was currently being taught in schools in the Northern Cape. Next year five students would be given the opportunity to be trained as Nama teachers at the University of Namibia.

“Over the past few years we have reduced the number of public schools that do not teach African languages from 2,500 to just over 460.

“By the end of next year we are aiming to ensure that all South African schools – we have 23,000 public schools – we want [all of them] to offer an African language where our children can learn our languages,” Ramaphosa added.

He explained that promoting languages was part of broader efforts to empower people and “it is part of the work that we must necessarily do to end poverty and reduce inequality”.

“We must say it very clearly, our history, our identity as South Africans, is closely linked to the question of land and it is for that reason that we say, the land must be returned to our people.”

Ramaphosa reminded that diversity should be a reason to unite under the values of dignity, respect and equality.

“In the end there is nothing in any of our traditions, in any of our cultures that supports that we must take action against one another, that supports that we must be violent against one another. There is nothing in our makeup as a people that allows the abuse of women and children, that allows men to want to rape young girls and women,” he added.

“We must similarly mount this struggle to fight against the dislike or hatred of people from other nations because it is not us… we have always been welcoming.”

He continued: “As much as we may have challenges and difficulty of poverty, unemployment and inequality, those should never make us want to raise our hands from people from other nations”.

At the same time, Ramaphosa said those from other countries should observe the laws of South Africa and also be documented.