VBS saga: MPs hear about lack of action from municipalities

Committee chairperson Faith Muthambi described the lack of action by the Limpopo municipalities as 'smelling of malicious non-compliance'.

The impact of the VBS Mutual Bank saga on implicated municipalities in Limpopo was laid bare during a week-long visit by the cooperative governance and traditional affairs parliamentary committee.

The committee, which concluded its visit in the province this week, heard how the delivery of basic services had collapsed in municipalities that invested millions of rand in the now-liquidated VBS.

In some municipalities, suspended municipal managers and other top officials continue to draw full salaries and benefits.

Mani and Musetsho were shot dead outside their homes by unknown assailants. It is believed their killings are linked to the VBS scandal as they vehemently opposed the more than R200m investment made by the Vhembe District Municipality.

In its interaction with community organisations, the committee was told of the deep anger still felt by families who lost money through the collapse of VBS and the failure to arrest Mani and Musetsho’s killers.

Former MEC and current SACP treasurer in the region Dr Tshenuwani Farisani put it this way: “It can’t be that people who have failed dismally in their duties are saluted and rewarded on their way out.

“Many families and burial societies are suffering while ‘a Mr and Mrs VBS’ are on honeymoon. We know that the looted funds were used to build mansions, buy farms and luxury vehicles.”

He warned the committee: “Some of you are members of the ruling party. Please be made aware that the people are angry by the lack of action on the VBS saga.”

Community organisations and trade unions have threatened to embark on mass action.

In Elias Motsoaledi Municipality, where service delivery has come to a halt, the committee was told it was spending R900,000 on a suspended municipal manager.

“What is even more worrying is that the disciplinary process has been postponed indefinitely since April 2019 with no clear timeline for the resumption of the process.”

Muthambi described the lack of action by municipalities involved in the VBS scandal as “smelling of malicious non-compliance”.

The committee is expected to compile a report that will be tabled in parliament. 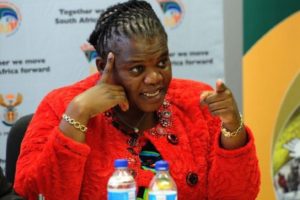