Ramaphosa was told of a lack of road infrastructure, street lighting and proper sewage systems in the small town, as well as substance abuse. 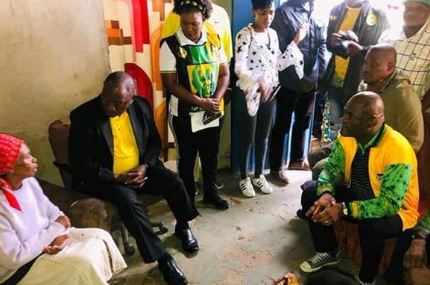 “The president’s visit gives us hope for Pampierstad”.

This is the sentiment of 21-year-old Ipeleng Williams, who lives in the small village, around an hour and a half from Kimberley.

Williams was one of hundreds of residents who endured a rainy Northern Cape morning to see ANC president Cyril Ramaphosa conducting a door-to-door tour of the community. The president was mobilising support ahead of the ANC’s January 8 statement rally at the weekend to mark the governing party’s 108 years in existence.

“It’s not just about seeing him. A one-on-one would be perfect because we might have a chance to give suggestions about what needs to be done here,” Williams told News24.

He said Ramaphosa acknowledged their small village meant a lot to residents and should serve as inspiration to the youth of Pampierstad to do more.

“It gives us a sense of hope that things will change for the better if a man of such stature as Cyril Ramaphosa comes here. I also want this to change the people here, not just the selected few,” said Williams.

He complained of substance abuse, lack of road infrastructure, street lighting and proper sewage systems, all issues which had been raised by other residents who had a chance to interact with Ramaphosa. He, in turn, promised the community action would be taken to address some of the urgent issues, such as the sewage system.

Earlier the president told the municipal infrastructure support agent engineer Tumi Thage to release funds and fix the old pipes being used. He said this would allow the toilets in the area to flush properly and residents would no longer be forced to rely on buckets as ablution facilities.

Residents had complained that the current system was not able to hold sewage.

“It’s got to be put right. I mean you can’t have a sewage system that is putting so much distress in the community. It’s only 2 km and all you need to do is increase the pipe size, engineer please,” Ramaphosa said. He also addressed the residents, urging them to make their way to Tafel Lager stadium on Saturday.

He said while it was expensive to put in roads, he wanted to see paving put in place to make road use easier for the community and would monitor how the province responded to issues which had been raised by residents.