Matatiele Municipality to account for high cost of ‘basic’ bridge

Residents have taken to social media to ask for an explanation how the bridge could have cost R3.2m to build. The bridge that has raised the ire of taxpayers in Matatiele local municipality..

Outrage on social media has forced the Matatiele local municipality in the Eastern Cape to call a press briefing to account for the R3.7 million construction cost of a 24-metre long bridge.

The bridge, which connects the communities of Myemaneni and Nomgavu villages, was funded through the Municipal Infrastructure Grant and taxpayers have demanded answers from the municipality.

Social media user A Lutfi Bin Kumsha posted: “Utter nonsense to say the least! This is a travesty, a spit on the face of tax payers and most importantly on the faces of your people! Red flags all over, collusion and inflated prices all over the project!”

Moleboheng MyDali Lebeko wrote on the municipality’s Facebook wall: “I’ve spoken to a number of people who are in the construction business, engineers and quantity surveyors who are refuting the cost of this culvert bridge with no pedestrian path. Y’all are playing us strue.” 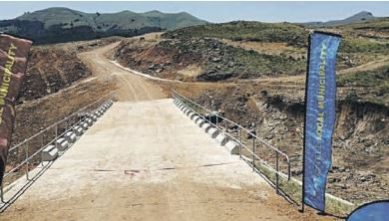 The bridge that has raised the ire of taxpayers in
Matatiele local municipality.

The municipality has acted swiftly and said that following the public outcry about the cost of the bridge, it would hold a media briefing today where it would provide a cost breakdown of the project which, it said, involved the preparation of earthworks for concrete columns before the actual construction.

Municipal spokesperson Olwetu Gwanya said the contractor, Amacwele Trading, was awarded the tender after the municipality had appointed an engineer to prepare cost estimates and construction designs. These were presented to the cooperative governance and traditional affairs (Cogta) department for funding.

“Upon approval, the municipality put out an open tender for bidding. Through that process, the lowest bidder was awarded the contract,” Gwanya said.

The embattled municipality, which was previously on Cogta’s watch list for poorly performing municipalities, issued a statement last month to announce the council had taken the decision to ask for administrative assistance from Cogta to help run the municipality.

Vhutshilo Magwala, who is an architect and engineer, said a simple rough estimation of the concrete volumes and reinforcement quantities would not even add up to more than R500,000 for the bridge.