eThekwini will be classified as level 4 as of May

This means some economic activity in the area will be allowed to resume under strict conditions to limit community transmission of Covid-19. Despite earlier comments from the provincial premier that an ongoing harder lockdown would be necessary in the city, the eThekwini municipality has been confirmed to be among the areas classified as level 4 when the country moves into a softer state of lockdown in May.

Government announced last week that the whole of South Africa would be moved into level 4 come the start of May, while decisions would be taken at a later stage to allow certain areas to be in different levels of lockdown alert depending on their own circumstances, particularly levels of infection.

KwaZulu-Natal Premier Sihle Zikalala was speaking at an event to commemorate the donation of vehicles to assist the municipality with mass Covid-19 testing and screening.

“eThekwini is going to be part of those that are opening up some sectors and therefore it means we will be part of level 4,” said Zikalala.

“But that means that all regulations that are still attached will be implemented strictly,” he added.

He was speaking alongside the province’s health MEC Nomagugu Simelane-Zulu and eThekwini mayor Cllr Mxolisi Kaunda.

Among the regulations that will be applied will be mandatory screening at entry points by employers who will be allowed to have a portion of their workforce back at work, the enforcing of social distancing in all areas, including public transport and the mandatory wearing of protective face masks.

The premier also confirmed that his office would spend the day in talks with the heads of companies who would be going back to work in order to ascertain how ready they were to comply with the regulations under this new level of lockdown.

The easing of the lockdown, as well as the five levels under which areas would be classified, were announced last week by President Cyril Ramaphosa. 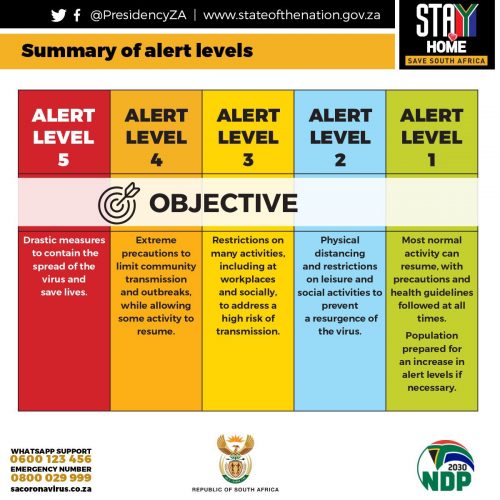 The premier had previously registered a cautious outlook on whether eThekwini would be moving into a new level based on the province’s rate of infection.

“If we were to use the National Risk-Adjusted Strategy guideline, as things stand, it looks like eThekwini will still remain under stricter lockdown regulations compared to other districts – unless there is a drastic change in the coming days,” said Zikalala.

At the time, there were 579 cases in eThekwini, compared to the 383 cases in the area the seven days prior to that.

Most of the new cases in the KZN province – over a 10-day period – were being registered in eThekwini.

“In fact, there is not a single day that eThekwini does not report new cases – unlike other districts, which can go on for days without having new cases,” said Zikalala.

The province had, up to this point, contributed nearly 21% of new cases in the country, according to Zikalala.

READ NEXT: What the ‘new normal’ could look like under Level 4