Law enforcement agencies will deal 'decisively' with plans to disrupt a de-densification programme in Johannesburg. 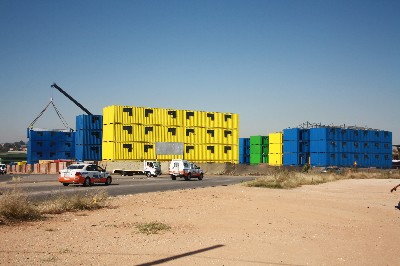 The Marlboro housing containers to be used for the de-densification programme of the City. Picture: Sipho Siso

The City of Johannesburg has warned residents of Alexandra against illegally occupying the Marlboro container units situated next to the Marlboro Testing Grounds, reports Sandton Chronicle.

This comes after mounting rumours that some homeless residents of the township were planning to invade the structures and occupy them as they seemed to be lying idle, amid claims that the City had a “pre-determined list of people it preferred to be allocated to the container homes”.

A community leader and board member of the Alex Chapter of NPO South Africa Day, Muntu Mbanjwa, has alleged that “the City just cooks up its own projects that do not benefit the people of Alexandra”. He added that there was a lot of talk on the ground about people wanting to occupy the containers.

The City spokesperson Nthatisi Modingoane told Alex News the containers were being converted into temporary relocation units that would cater for both family and single units as part of a programme of de-densification of congested informal settlements in Alexandra and other parts of the city.

Modingoane said the City intended to improve the lives of residents living in these congested areas by providing safer conditions to enable residents to adhere to lockdown regulations in response to Covid-19. He said the City’s department of housing had appointed the Johannesburg Social Housing Company to implement the delivery of this project.

“The projects are still under construction and are funded through the Human Settlements Emergency Funding Programme [of the Gauteng Provincial Government]. The Housing Department has an in-house allocation department that will allocate the units accordingly, thus avoiding illegal occupation.

“If people are planning to invade the units, the law enforcement agencies will deal with them decisively,” Modingoane warned.

These are the areas affected by Joburg's water restrictions today
3 weeks ago
3 weeks ago
PREMIUM!

These are the areas affected by Joburg's water restrictions today
3 weeks ago
3 weeks ago
PREMIUM!