6 warning signs your favourite health product may be a scam

When it comes to your health, don't necessarily take everything at face value. In an age of fake news, it’s probably unsurprising that this thinking is spreading to the world of health products. Being able to tell the difference between what actually helps and what is a scam is becoming harder and harder, and South Africa’s somewhat relaxed laws around what can or should be sold as a “health supplement” has made the problem worse.

In this country, medical supplements, or practices, which are not part of standard medical care are called complementary and alternative medicines (CAM). Standard medicine in this context is what many would call Western, mainstream, orthodox, or regular medicine.

CAM medicine is, therefore, anything that falls out of the medicine used by those with medical degrees as well as registered nurses, physical therapists, or psychologists. Some CAM therapies have undergone careful evaluation and have been found to be safe and effective, however, there are others that have been found to be ineffective or possibly even harmful. The vast majority of CAM medicines have not undergone nearly enough testing to truly know their impact, or in some cases, haven’t gone through any form of testing at all.

This is bad news for consumers who can be harmed in a number of ways by products which don’t do what they claim to do.

The damage done by these products can be direct when, for instance, users suffer from allergic reactions to undeclared ingredients in the product or when the substance reacts in an unexpected fashion with other drugs the user may be taking. St Johns Wart, which some people take for depression, for instance, has been shown to have a negative effect on cancer treatments.

Most often the damage of these products occurs indirectly when the user, thinking they are already treating themselves, may opt to not seek the proper medical attention they need.

The very best result is that the health supplement is a farce and the only side-effect is that the user has wasted a vast amount of their money buying something that has given them no more than a placebo effect.

So with all this in mind, we present six easy things you can look out for to avoid becoming the victim of these, at best, unhelpful health supplements.

Sadly science has not yet been able to come up with reliable cures for everything and this is generally where the fake health supplements, additives, and cosmetics companies tend to step in.

“Alternative medicines” often claim to cure every problem under the sun from arthritis and poor memory to the signs of aging, colds, undiagnosed pains, diabetes, cancer, heart disease, obesity, and sexual dysfunction.

If something sounds too good to be true, such as a way to lose weight without proper diets or exercise, it’s probably little more than a scam. The more audacious the claim, the less likely it is to be true.

This rule can be applied to everything from pills and potions, to bracelets, apps, or supplements.

Over the years we have developed a trust in our local pharmacists. They are people we associate in the same group as doctors, and hospitals, and traditionally they have always been very good at administering the right treatment for any occasion.

Sadly though, the days of pharmacists setting up their own small shops are quickly vanishing over the horizon and the places we go to are now mainly run by large companies which consider profit more important than health.

While the pharmacist’s counter is generally trustworthy, the shelves leading up to that counter may very often not be. The biggest chains in SA can now be found stocking hundreds of readily available products that all essentially do nothing except increase their bottom line.

In its 2018 financial end-of-year report, Dis-chem’s independent non-executive chairperson, Larry Nestadt, said that the company “presently holds over 40% of the complementary and alternative medicines (CAMs) market”.

He suggested that profits from this lucrative sector may be “impacted by the roll-out of CAMs legislation that sets new regulations and registration criteria for the category”.

One of the strongest signs that a product may be actively harmful is if you can not find a full list of its ingredients.

In October 2018, researchers from the California department of public health released a report stating that between 2007 and 2016, they found 776 products marketed as dietary supplements that contained hidden active ingredients that were either unsafe or unstudied. Many of these are being sold in South Africa.

The study researchers found examples of “weight loss supplements spiked with cancer-causing drugs that had been pulled from the US market, and brain enhancers laced with chemicals that have never been approved for sale in the US. More than 100 products contained DMAA, a drug that’s been banned in the US, UK, and several other countries because it is linked to strokes, heart failure, and sudden death”. 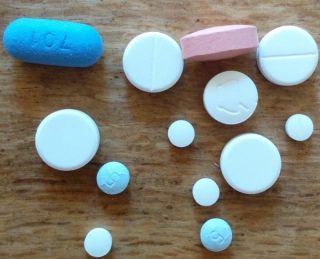 One of the strongest signs that a product may be actively harmful is if you can not find a full list of its ingredients. Photo: GroundUp staff

Adverts that contain testimonials from happy users of a product are generally a sign that the product itself does not work.

Marketing over the years has shown that the most effective way to get someone to buy something is for them to receive a recommendation from their friends. A close second is a recommendation from a trustworthy stranger. Celebrity endorsements exist simply because we are wired to think of celebrities as people we know, and as therefore being more trustworthy.

As a result, companies that depend on marketing to shift their products will often lean on the user testimony as a subtle way to encourage us to believe they are to be trusted, particularly if their product doesn’t actually work.

Enthusiastic “former users” can therefore often be seen on telesales commercials, or heard on the radio, encouraging people to simply take a tablet, or freeze themselves if they want to lose weight, look younger, or improve their memories.

The head of performance and strategy at Conversion Science, Glen Bo, explains that apart from the benefit of the average person feeling like they are receiving a recommendation, there is a second reason testimonials are used in commercials for these companies.

“These companies have to be so careful about the words they use in the adverts. You will see for example that they never say, ‘X-product caused me to lose weight’, but rather ‘X-product assisted me in losing weight’,” he said.

“In the event that a consumer tries to take the brand to the Advertising Standards Authority claiming false advertising, a testimonial will allow the company to defend themselves by saying, ‘We didn’t tell you it would work for you, we just said it worked for him’. It’s deflection. Check the packaging closely, it will always say something like ‘individual results may vary’.”

Products that don’t work often have to turn to marketing strategies to make a sale. Words like “astounding”, “miracle”, “breakthrough”, and “incredible” on the packaging or advertising should be huge red flags, but there are also more subtle words companies will use to try to sell you useless treatments, supplements, and medicines.

One of the more recent tricks is to use made-up medical or scientific sounding words that actually have no basis in reality. Be wary of words that include the medical-sounding affixes like bio-, micro-, and pro-. Real world examples include “biomolecular”, “microtechnology bioactive”, “pro-collagen”,  “micro-smoothing”, “bio-stimulating”, and “micro-lift”.

But it goes deeper. In the 90s, marketing teams began to develop entire words and definitions that actually contain no medical or legal meaning outside of their marketing campaigns. The word “cosmeceutical” for instance is used to try to indicate that a cosmetic product has medicinal or drug-like benefits, but the truth is, if it did, it would have to be marketed as a medicine and not as a cosmetic.

In short, don’t believe a product just because it claims to contain alpha lipoic acid and dimethylaminoethanol or a “cellular replenishment serum” – usually, it’s just a moisturiser.

Other offers to avoid include any that come with a “no-risk, money-back guarantee, free gift included”. Have you ever seen Panado sold like that?

While it’s not absolutely fool-proof, since many CAM companies do not comply with legislation, a quick way to see if something is useless is simply to read the whole paper insert.

The Medicines Control Council has introduced a requirement that complementary and alternative medicines (CAM) need to carry a label stating that the product has not been evaluated by the Council and that it is not intended to diagnose, treat, or cure any disease. In some cases, particularly relating to those products that claim to cure illnesses or have medical benefits, if it complies with these laws you should be able to tell it doesn’t work because it will simply say so on the insert. Don’t be afraid to open the box and read for yourself.

The ultimate answer though is that if you are thinking of taking an unapproved supplement, or medication, embarking on a suspicious treatment or buying a questionable product, simply speak to your doctor about its potential benefits, downsides, or side-effects.

Or, if you want to save yourself a trip, head to the website Camcheck.co.za where Dr. Harris Steinman, a medical doctor, has been evaluating hundreds of local CAMs on the South African market for their efficacy and has published his findings.