The Transition Football programme sets out to produce professional footballers who would do great both nationally and internationally. One of the programme’s co-founders, Claudio Lorenzani, said they started to operate as a high-performance training soccer programme last December and will play in the Rand Central Local Football Association league this year. The programme currently has U10 to U15 age groups as well as a senior age group.

Recently its U13 team played against Orlando Pirates and drew 2–2, while their U15s also played the Buccaneers, but lost 3–0.

“Although the result [U15] never went our way, much was learned from the mighty Bucs and that is what football is all about,” said Lorenzani.

He explained that there are two parts to the programme adopted. African flare is an aspect their players bring to the game. Players also learn the European way, which is all about being tactically and technically strong. 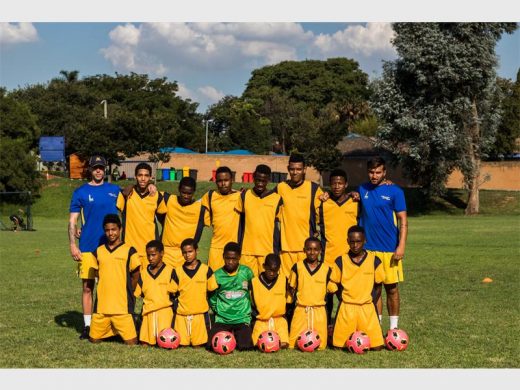 Coaches, Gregory Lowe and Claudio Lorenzani (both in blue) with one of their programme’s teams.

“We have some of the most skilful players in the world which, combined with their extreme athleticism, creates a deadly combo on the field which amazes European spectators whenever they watch South African football.”

He added that if they managed to mix their African flare with the European efficiency they could produce players that international teams would scout.

The programme hopes to achieve a top-four finish in each of the age groups entered into the league. “Our main goal is to promote two players into professional football this year, either locally or abroad.”

Lorenzani said one of his players, Innocent Hakulandaba, was currently on trial at Real Vicenza in Italy and could be the first export of the season.

He explained that to become a professional footballer it took an extreme amount of hard work on and off the field. “A player needs to be technically and tactically ready as well strong and fit.”

Lorenzani said discipline and an openness to learning also played an integral part. The programme currently has 65 players and is desperately in need of more goalkeepers.