BMW ends up in dam at Goodies for Gardens in Joburg

The driver was still inside, unconscious, before being rescued by professional security. Picture this: you’re driving down Vlei Street in Kempton Park, perhaps on your way to the local nursery.

To your left is the small dam next to Goodies for Gardens, as it always is. Only now, a silver car is stuck in it, with its headlights barely visible.

Even worse, the driver is still inside.

This is the distress call that Gerald Groenewald and Pieter Anderson from SecPros security received on Tuesday evening at about 5pm.

“When we arrived on the scene, we found a male driver inside a BMW X3. The car was about one metre into the water,” Groenewald told the Kempton Express. He tried to get the driver’s attention by shining his torch into the vehicle, but the man was unresponsive.

Also on the scene were Shawn Wright from Birchleigh Neigbourhood Watch, Martin Williams from SSS Security and Ryno Opperman from MML Security. Together, the men decided to remove the man from the car. 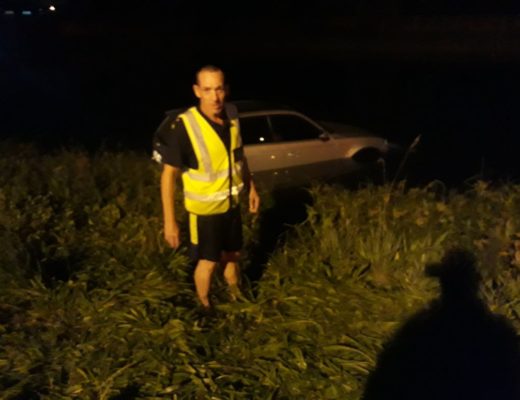 Pieter Anderson from SecPros security went into the freezing water to help the crash victim.

“Anderson stripped down to his short pants and went into the freezing cold water. Upon opening the door of the vehicle he found the driver up to his waist in water and still unresponsive,” Groenewald added.

Anderson removed the driver’s seat belt, held him in a rescue position and pulled him to the bank of the dam. The other rescuers present then pulled the driver to safety. Opperman stabilised the patient while they waited for paramedics to arrive.

When ER24 arrived on the scene they declared the patient stable and transported him to Arwyp for further treatment. It remains unclear how the man ended up in the dam.

A post about the incident was made on Facebook. Here, Achnusca le Roux identified the driver as her husband. She stated he was not under the influence but that something was wrong with his health. She added that he was undergoing tests in hospital.

The Express unsuccessfully tried to contact Le Roux before going to print.