Rhino poacher sentenced to R1m fine or 10 years in prison

The accused was convicted and sentenced on a charge of hunting specially protected animals without a permit and other charges. Freitas was cornered during a successful police operation in Lephalale in January, 2017. Photo: Limpopo police

Provincial police commissioner Lieutenant-General Nneke Ledwaba is elated by the sentence meted out to convicted rhino poacher, Antonio Xavier Freitas (57), who was on Monday, 7 May, sentenced by the Lephalale Regional court in Limpopo to R1 million fine or 10 years’ imprisonment, Bosveld Review reports.

This sentence emanates from a case, reported in January 2017, that was investigated by the Endangered Species Unit of the South African Police Service.

“The meticulous detective work that was carried out by members of this unit ensured that Freitas ended up pleading guilty to the charges,” says police spokesperson Brigadier Motlafela Mojapelo.

Prior to the apprehension of Freitas, the investigating team was led to the scene at his farm in a well-coordinated operation. On arrival the following were recovered: 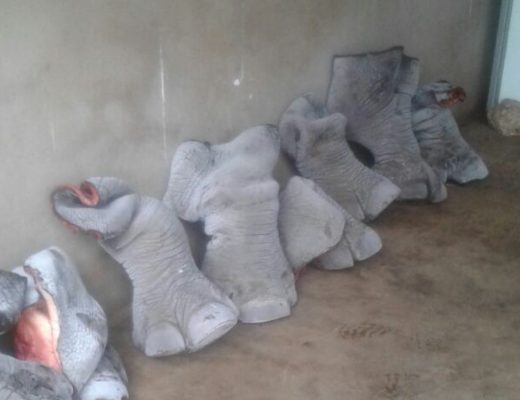 • Seven carcasses in a cold room
• One decomposed rhino carcass
• Two rhino hides (skins) and some bones dug from the ground at the same farm. The provincial commissioner has commended all members who were involved in these investigations, and urged them to leave no stone unturned until all those who received the rhino horns are also arrested.

“The police are still following up on the information that a helicopter was seen in the vicinity, which raised suspicions that the rhino horns might have been taken to other destinations. Anyone with information is requested to contact Warrant Officer Johannes Jurgengs van Heerden at 0828144300,” Mojapelo concluded.