After nearly three hours of waiting in a wheelchair in the emergency ward, Eugene de Kock was finally given a bed and placed on a drip. After he was mugged and beaten in Krugersdorp, 20-year-old Eugene de Kock visited the Leratong public hospital, where he claims he was badly mistreated by inattentive staff.

After nearly three hours spent waiting in a wheelchair in the hospital’s emergency ward, Eugene was finally given a bed and placed on a drip.

At 1am, his girlfriend Minke Visser found him asleep, but his drip had stopped running. After informing a nurse about this, the nurse said, “Oh sorry, I forgot”, after she had injected something into the drip, Minke told Krugersdorp News. Eugene spoke to Krugersdorp News about his horrid experience at the hospital, and felt he needed to inform the public.

Eugene and Minke said there was one “nice nurse” who came to them at about 2.30am and asked why he hadn’t been taken to x-rays yet. Up until that point, they had only had encountered rude nurses who yelled at them, even though they were polite in return, they claimed.

After his x-rays, and after two hours sitting in the hospital’s hallway, nurses came to take his wheelchair and later took his drip stand, forcing him to hold the drip bag in his hand.

By this time, Eugene’s blood had syphoned back into the drip bag, filling up a good portion of it. 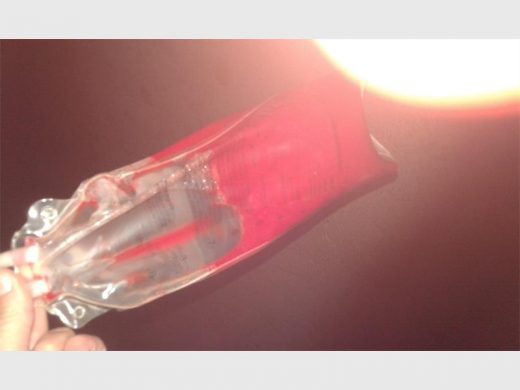 Eugene de Kock’s drip bag filled with blood after hours of not being checked on. Photos: Submitted.

“I went in to see the doctor, who said he had blood clots which could grow and burst,” Minke said, adding they were told that one of his ribs was out of place. Eugene later went to Medicross Krugersdorp where, they said, the doctor told them that his ribs were only bruised and that there was no sign of a blood clot.

They could not say who had helped them during the night, as none of the staff seemed to have worn name badges.

Krugersdorp News has contacted Leratong Hospital’s communications officer for comment but has received no feedback yet.