Bloemfontein contractors up in arms over IPTN tenders

The Mangaung Business Transformation Umbrella accuses the municipality of excluding them and overlooking local contractors. 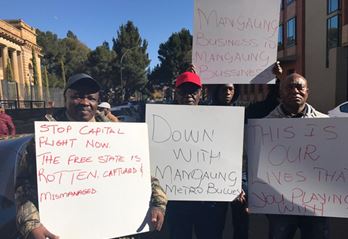 A group of disgruntled Bloemfontein contractors who are at odds with the Mangaung metro municipality over the newly launched Integrated Public Transport Network (IPTN), Hauweng, have promised to disrupt Mangaung if their demands are not met.

The Mangaung Business Transformation Umbrella (Mabtu), of which Foko Motlatsi Phillimon Contractors is a member, gathered at the front entrance to the Free State High Court on Monday in support of a fellow contractor who dragged the metro to court over the IPTN contract.

The chairperson of Mabtu, Mzwandile Phaphu, said the contract designated for revamping and refurbishing two old roads related to the network was flawed.

He alleged that contractors from Mpumalanga and Gauteng with a score of 37 points below the possible score of 100, had been given contracts, while locals with full points were overlooked by the metro.

Recently a local youth group got into a heated argument with a local ward councillor, Mxolosi Siyonzana, over the awarding of the tender.

Phaphu claimed the metro’s officials stand to benefit or pocket money from those who the tender has been awarded to. The metro is yet to comment.

Mabtu members yesterday accused the municipality of excluding them and overlooking local contractors.

In May, mayor Olly Mlamleli promised to hold workshops to find ways to ensure that small businesses benefit from the construction work done for this project.

GladAfrica was appointed as the service provider for the project in 2015. The company also listed it as one of its projects on its website.

The company, which has offices throughout the country, is responsible for the design and implementation of the project at a cost of about R5 billion.

The auditor-general last year found that processes followed in awarding a R12 billion project-management tender to GladAfrica by the City of Tshwane were in contravention of the law. This led to the cancellation of the contract.