Most of the lower and ground-level shops were flooded, and all customers were evacuated. All lifts and escalators were also shut down. 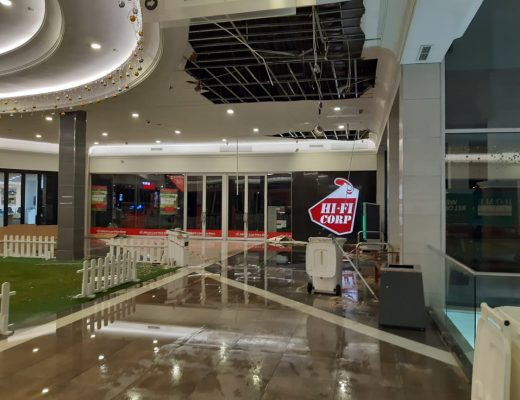 The ceiling of the shopping centre collapsed after heavy rains and hail ripped through the area. Image: Comaro Chronicle

The Glen Shopping Centre was closed due to heavy rainfall causing flooding and a ceiling collapse on Thursday afternoon, reports Comaro Chronicle.

Shop assistants frantically tried to brush all the water down into the basement of the mall. Shop assistants brushing water into the basement of the mall.

According to The Glen’s marketing manager, Dean Myburgh, the ceiling collapse was as a result of “one of those unusual flash floods” combined with heavy hail which blocked the drain, forcing the water to overflow and come down to the lowest point, which happens to be The Glen.

Most of the lower and ground-level shops were flooded, and all customers were evacuated. All lifts and escalators were also shut down, but no injuries were reported.

A small section of the shopping centre also collapsed. It is not yet clear whether the mall will be open on Friday.