'I lay on a stretcher and I could feel myself leaving my own body,' he says. Johan 'Gerrie' Germeshuizen in the Life Mercantile Hospital just before he was discharged.

Johan ‘Gerrie’ Germeshuizen from Graaff-Reinet is back home after a Cape cobra bite left him at death’s door. Doctors have labelled his survival “a miracle”.

Germeshuizen’s harrowing ordeal started on 3 February at his place of work, AF van den Berg and Son Maintenance in town, while getting ready to go home at 5pm, reports Graaff-Reinet Advertiser.

Packing up, he opened his desk’s top drawer – never thinking for a second that grave danger was lurking and that he would soon be fighting for his life.

As he put his hand in the drawer, he felt a sting and saw a snake dangling from his right index finger. That moment changed his life.

He called his colleagues for help, who at first couldn’t believe that he was bitten by a snake.

Germeshuizen looked into the drawer to identify the curled-up snake, and at first glance thought it was a rinkhals.

“As the people came to see what was going on, I realised it was a Cape cobra,” Germeshuizen said.

At his home on Lombard Street, Germeshuizen went through hell. At first, he felt a burning pain in his finger, but it quickly spread to his hand and up into his arm. He realised he had to get medical assistance immediately, as he knew a cobra’s venom spreads through your body at high speed with fatal consequences. 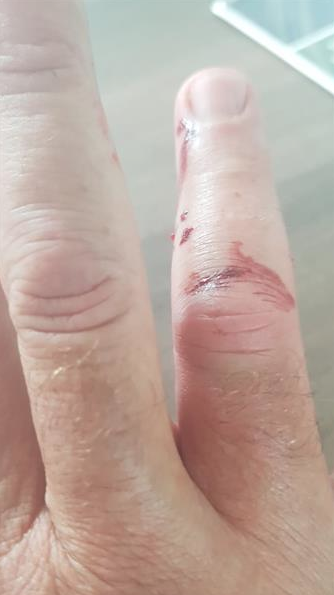 The mark on Johan ‘Gerrie’ Germeshuizen’s finger, moments after he was bitten by a Cape cobra.

His sister, Thelina Geater, rushed him to Midland Hospital. There, according to Germeshuizen, he was told to wait.

“I began to feel light-headed and after approximately 90 minutes I turned blind,” he said. “Then I was told the hospital had no antidote.”

His employer, Awie van der Berg, rushed him to Cradock, because they heard there was one last antidote available. After driving 90km, Van den Berg received a call from Midland Hospital telling him they had located 15 antidotes.

Germeshuizen needed at least 11, so they rushed back.

Back at the hospital, Germeshuizen felt as though he was dying.

“I lay on a stretcher and I could feel myself leaving my own body. I was standing next to the bed and saw myself, with four people working on me,” Germeshuizen recalls.

After receiving the antidote, he was rushed to Livingstone Hospital in Port Elizabeth, where he spent five hours before he was taken to Life Mercantile Hospital.

Germeshuizen said he could hear people speaking and even identified their voices.

“‘He’s dead’, I heard the doctors say, before one doctor saw my toe moving.”

Germeshuizen said he again experienced an out-of-body experience and saw a man with the most beautiful eyes coming towards him from a white background.

“I was sure the man was an angel or God. I told him he can take me, but he must please look after my elderly parents.”

Germeshuizen’s father, Tiens, is 90 years old and his mother, Elaine, 88.

At the Health Life Mercantile Hospital, the recovery process started, but for five days Germeshuizen could not speak or move.

“It was just me and God,” he recalls. By 15 February, he had recovered sufficiently to return home. He still suffers from an infection, as well as kidney and liver damage, but he lives life positively and is grateful to have survived.

“I’m alive, and I appreciate life.”

Germeshuizen has had to learn to walk, speak and use his hands again, but has regained his independence and can even drive again.