The suspects stole food parcels at the school before setting them alight and fleeing. 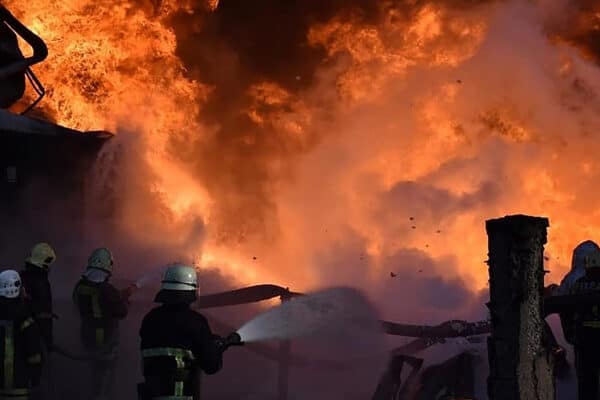 Firefighters trying to extinguish a fire at an industrial site of fuel storage in Lutsk, northwestern Ukraine, as a result of the March 27 shelling. Photo: AFP/Stringer/ State Emergency Service of Ukraine

South African Police Service (SAPS) in Malamulele have launched a manhunt for the suspects following the incident.

According to the saps statement, the police in Malumele were patrolling the area when they noticed fire flames coming out of the school premises.

They then went to further inspect and found the school engulfed in flames.

“It was discovered that the school is torched and firefighters were summoned to extinguish the fire,” read the statement.

When attempting to gain entry, the school gates were locked leading them to break the padlocks to gain access to the premises.

Police discovered it was only the staffroom block where the school kept stationaries, laptops, printing machines, and other items that were set alight.

“Upon further investigations, it was also discovered that one of the classrooms where the school kept the feeding scheme food was also broken into and the food parcels were missing and others were scattered in the premises, read the statement.

A hole into which the suspects may have gained entry and on the school’s wire fence was discovered and food parcels they may have dropped when fleeing.

The extent of the damaged property is unknown at this stage.