Three pedestrians killed by vehicles in KZN and Free State 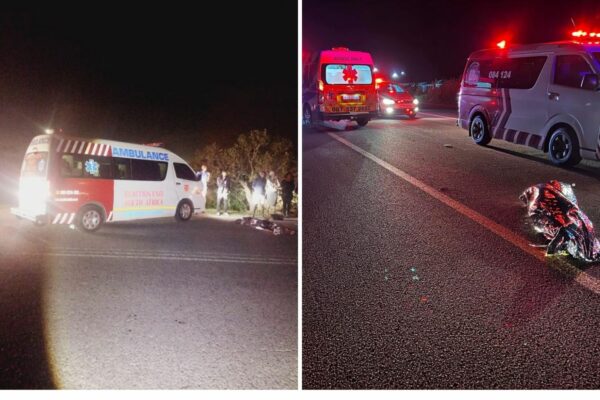 Three pedestrians were hit by vehicles in three separate incidents over the weekend in KwaZulu-Natal and the Free State.

Two of the incidents are hit-and-run incidents in KZN.

All three victims died at the scene.

A man thought to be a Lesotho national was struck down by a light motor vehicle on the N1 north, close to the Engen 1-Stop outside Bloemfontein, Free State.

Upon arrival, medical personnel found the pedestrian lying lifeless on the road.

He was certified dead at the scene.

“The driver of the vehicle was also assessed by paramedics and found not to have sustained any injuries,” medics said.

ALSO READ: Traffic volumes to pick up after Easter break as 38 deaths recorded in four provinces

Meanwhile, a 25-year-old female pedestrian died in an alleged hit-and-run on Jabu Ngcobo Road, in the vicinity of Trenance Park.

The victim was on her way to visit her family in KwaMashimane, near Trenance Park, when she was hit by a white bakkie belonging to a Durban-based security company on Saturday afternoon.

The driver fled the accident scene.

In another hit-and-run incident, a man was found lifeless on Umdloti Beach Road, near Umdloti, on Friday.

A passerby made the gruesome discovery of the dead man on the road and contacted Rusa officials at about 7:30pm.

According to Rusa officials, the pedestrian sustained life-threatening injuries and died at the scene.