Parliament apologises to SA for the conduct of ‘certain members’

MPs 'will have to seriously consider and make a determination on whether the existing joint rules sufficiently guard against disorderliness'. 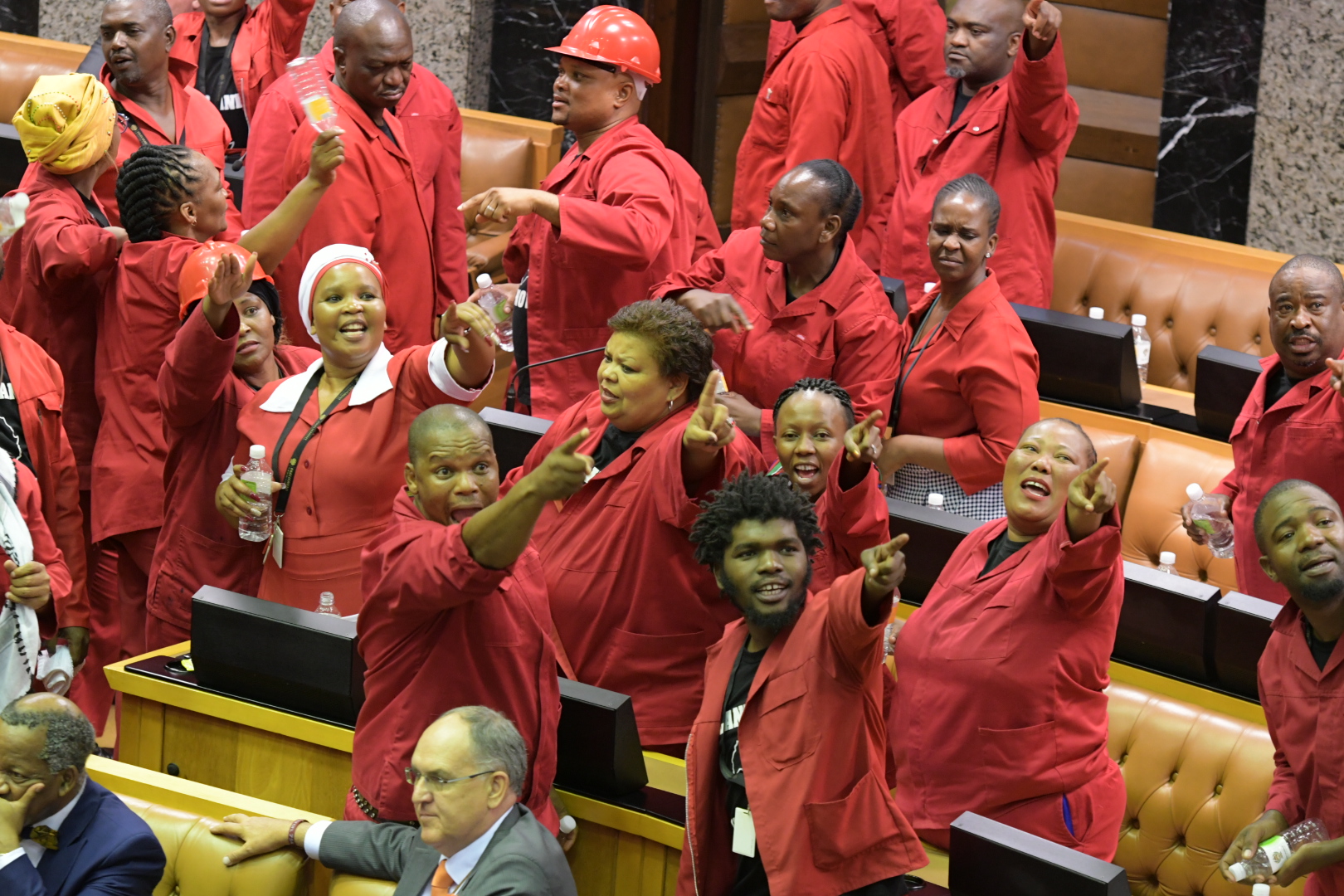 The EFF managed to grab the attention for all the wrong reasons, prompting calls to hit them in their pockets, for disrupting proceedings. Picture: Jacques Nelles

Parliament’s presiding officers have apologised to South Africans for the conduct of “a few of its members” on a night when the EFF again disrupted the State of the Nation address (Sona).

Before President Cyril Ramaphosa could get a word in, several EFF MPs, including leader Julius Malema, raised points of order – first insisting that former deputy president and the last apartheid-era president FW de Klerk leave the public gallery, and then insisting that Public Enterprises Minister Pravin Gordhan be fired.

National Assembly Speaker Thandi Modise asked them on several occasions to stop raising the same points of order and not to stand up and speak without being recognised. She also asked EFF MP Primrose Sonti to leave the chamber, but Sonti did not do so.

Eventually, after Modise suspended proceedings and Malema was allowed a short speech, the EFF MPs left the chamber, with some throwing water bottles at MPs as a parting shot.

“The presiding officers… join the rest of the membership of the Houses of Parliament in extending an apology to the guests and the people of South Africa for the conduct of a few Members of Parliament during the State of the Nation Address last night,” read a joint statement from the presiding officers, Modise and the chairperson of the National Council of Provinces (NCOP) Amos Masondo.

“It is understandable that the people of South Africa would be highly concerned and disappointed by the conduct of certain members of Parliament. In order to restore order and calm, the presiding officers had to briefly suspend the sitting, which helped to calm the high emotions and allowed the House to determine a way forward.

“The president was able to deliver the State of the Nation Address.”

The statement confirmed what Modise said during the sitting – that the conduct of EFF MPs will be referred to the Powers and Privileges Committee of parliament for consideration and recommendation to the Houses of Parliament.

“Going forward, Members of Parliament will have to seriously consider and make a determination on whether the existing joint rules sufficiently guard against disorderliness that has the potential to paralyse the business of the House,” the statement read.

After they left the National Assembly chamber, Malema defended his party’s actions and warned that this was how they will continue to engage with Ramaphosa.

In 2014, the Powers and Privileges Committee suspended some EFF members without pay and docked other EFF MPs’ pay after they chanted “Pay back the money!” during a question session with former president Jacob Zuma. This session was suspended and set the National Assembly on a tumultuous course.

The EFF challenged the committee’s sanctions in court, but the court ruled in parliament’s favour.