Lamola says more than 1400 people were admitted to prison facilities as of Tuesday. 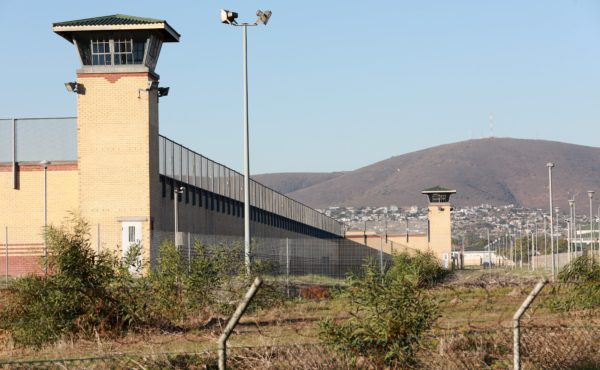 A general view of guard towers at the Goodwood prison on May 08, 2020 in Cape Town, South Africa. It is reported that offenders who committed petty crimes will be eligible to be included in the 19,000 inmates who will be released on parole to combat the spread of Covid-19 in prisons. (Photo by Gallo Images/Nardus Engelbrecht)

Minister of Justice and Correctional Services Ronald Lamola says overcrowding in prison cells remains the most challenging issue following arrests as a result of the rampant looting and violent unrest that occurred in parts of KwaZulu-Natal and Gauteng.

Lamola on Wednesday briefed Parliament’s portfolio committee on justice, where he revealed that Department of Correctional Services (DCS) facilities were “stretched due to overcrowding”.

‘No one will evade justice’

Lamola indicated more than 1400 people were admitted to facilities as of Tuesday.

“From a Correctional Services perspective, we are required to reconfigure the remand detention system, which is already overburdened. We have received a high number of remand detainees in KwaZulu-Natal and the Gauteng region as a result of arrests made for recent criminal acts and violence.

“To date a total of 1498 remand detainees were admitted in our facilities. This was as of yesterday’s [Tuesday] count… the numbers could have increased. Our facilities are stretched due to overcrowding and our challenges are exacerbated by the Covid-19 pandemic,” he said.

Lamola, however, said no person involved in the looting and violence would evade justice.

“We continue to mitigate against the challenges through various measures. Both regions of Gauteng and KwaZulu-Natal are coping and continue to admit new inmates. We ensure that the new detainees are isolated for Covid-19 screening and observation before they interact with the general inmate population.

“So honourable members, rest assured that no one who took part in the acts of criminality will evade justice. Our institutions are working together to expedite all matters before them. Justice will take its course and the rule of law will reign supreme,” he said.

The minister also pointed out the South African Police Service (Saps) prison cells were also experiencing overcrowding, adding that quick processing was required due to the large number of arrests.

‘Violated the spirit of the Constitution’

Lamola also told the committee that the acts of violence witnessed fell within the Protection of Constitutional Democracy Against Terrorist And Related Activities Act.

“Our analysis reveals that the unrests and incidents of violence we witnessed in the past week were occasioned by a confluence of issues.

“The violent acts of burning of national key installations, disruptions of economic activities, blockade of national roads, leading to disruptions of key supplies such as food, medicine, electricity, telecommunications and so forth, with dire consequences for thousands of people some of each who would falls squarely within the parameters of the Protection of Constitutional Democracy Against Terrorist And Related Activities Act 3 (33) of 2004,” he said.

ALSO READ: Special court may be set up for looters

He said law enforcement must investigate those who “violated the spirit of the Constitution and all legislation that could have been affected” by the violence.

Since the start of the violence in KwaZulu-Natal and Gauteng, more than 200 people had lost their lives – with more than 2550 people arrested as of 19 July.

Police are also investigating 131 cases of murder and have opened inquest dockets in respect of 81 deaths.

Meanwhile, police have arrested nine of the 12 alleged masterminds – including former Ukhozi FM DJ Ngizwe Mchunu – behind the riots and destruction of property.

While more arrests are expected, one of the alleged instigators has since been granted bail.

Mchunu has since been denied bail and remains in custody following his first appearance at the Randburg Magistrate’s Court on Wednesday morning.

According to News24, Mchunu’s bail application has been set down for 28 July.