Mabuza thanks Putin for engaging with Ukraine, says Nato ‘root cause’ of conflict

'We want to thank the Russian Federation, especially Vladimir Putin for opening a space for mediation and talks,' the deputy president says. 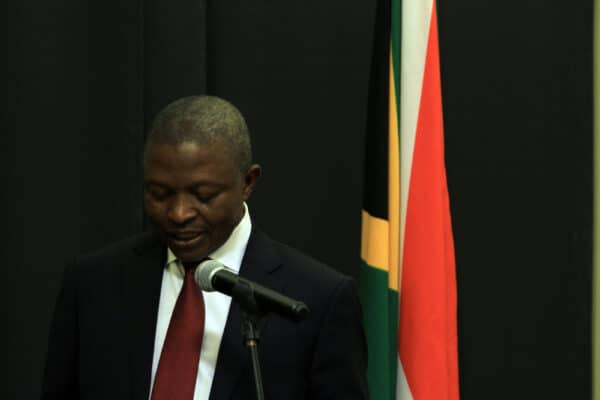 Deputy President David Mabuza says that the ongoing war between Russia and Ukraine is a result of the expansion of the North Atlantic Treaty Organization (Nato).

Mabuza responded to questions in the National Council of Provinces (NCOP) on Wednesday afternoon.

During the virtual sitting, Mabuza said government was ‘confident of the potential that dialogue has in resolving conflict.’

“President Cyril Ramaphosa took a call with the President of the Russian Federation Vladimir Putin to express our support to the ongoing negotiation efforts between Russia and Ukraine.

ALSO READ: Putin explains his reasons and goals of ‘special military operation’ in Ukraine to Ramaphosa

“We believe that diplomacy is always the most sensible pathway in averting the outbreak of conflict and war. It should be pursued even when we are already in a situation of war so that we end it and engage in a post-conflict reconstruction measures.

“South Africa continues to call for de-escalation of conflict, cessation of hostilities, and for the parties to work together towards building trust and confidence by intensifying existing peace mechanisms and dialogues to achieve long-lasting solutions to the conflict,” he said.

Mabuza continued to say: “We are proud and happy that Russia and Ukraine are locked in a meeting to try and find one another and resolve their problem.”

SA open to talking with Ukraine

The deputy president said Ramaphosa was open to talking with Ukraine’s President Volodymyr Zelensky having done the same with Putin last week.

“The president has initiated this open door policy by taking a call with the president of Russia. I’m sure the president will continue to meet the president of the Ukraine for a discussion because we want to re-emphasise the underlying principle of our foreign policy and relations,” he said.

Mabuza seemingly hit back at government’s critics, insisting that “no amount of condemnation or side taking” will resolve the war.

“We are a nation born out of conflict, and we chose a negotiated settlement which has proven to be the best and long-lasting solution to our problems.”

The South Africa government has come under fire for its neutral stance on Russia’s invasion of Ukraine after failing to condemn the war.

But Mabuza insisted that government won’t turn blind eye on Russia because it is part of Brics, which is an economic grouping alongside Brazil, India and China.

“Yes, we have got strong relations with the then-Soviet Union and now the Russian Federation… we are cooperating together in the platform called Brics, but that does not mean we are blind to the situation that is happening between Ukraine and Russia.”

The deputy president went on to say that Nato’s expansion in eastern Europe was the root cause of the Russia’s invasion of Ukraine.

“There were agreements that were reached to not expand Nato, even with one inch, towards the east and some of these agreements were not honoured.

“But be that as it may we have reached a point where we are now… where we think the best way to resolve all the problems that has accumulated for all these years [is through mediation].

READ MORE: Pressure mounts on SA to call out Russia for its invasion of Ukraine

“We think there’s a possibility of opening a platform where the parties can talk and resolve their problems. We want to thank the Russian Federation, especially Vladimir Putin for opening a space for mediation and talks between his government and the Ukraine,” Mabuza added.

Mabuza’s response comes a day after a debate on the war’s impact on South Africa’s economy was held in Parliament.

The motion for the debate was tabled by Democratic Alliance (DA) leader John Steenhuisen.

On Tuesday, MPs from the DA, Inkatha Freedom Party (IFP), Congress of the People (Cope) and the Freedom Front Plus (FF+) lashed out at government for not condemning Russia’s attack on Ukraine.