The DA has been making a variety of election posters in response to what they see as the ANC's failings. 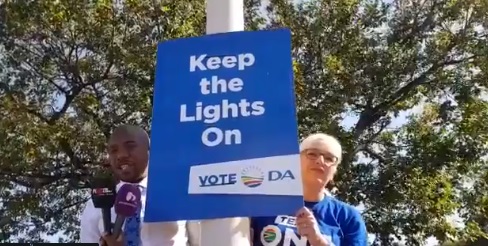 The leader of the Democratic Alliance, Mmusi Maimane, has unveiled the party’s election poster, which he hopes will send a strong message to not only Eskom, but the ANC.

The poster titled: Keep the lights on was unveiled on Wednesday outside Eskom’s Megawatt Park in Sunninghill, north of Johannesburg, where the party wants to march to in a campaign to put a stop to load shedding next Friday.

Maimane called on all South Africans to come together next Friday for a national “shutdown”.

“Next week Friday must be a national day and a shutdown, because, ultimately we want South Africans to take action against the crises that [have] been invented by the African National Congress. The ANC does not have a plan as to how to [guide] us through this crisis. Instead, on the [first of] April, they are going to charge the people of South Africa more on energy and other resources.”

It was a surprise when President Cyril Ramaphosa said he was shocked at the Eskom crises, said Maimane, since he had been the head of the war room spearheading decisions.

Another poster was unveiled in Tembisa earlier in March where Maimane made the 44 out of 10 South Africans blunder. The poster was titled: “A job in every home”.

The DA later corrected his faux pas to say he meant four out of 10 South Africans could not find a job.

Maimane was quick to point out that the DA had a plan for Prasa’s overcrowded trains on Monday after Ramaphosa, David Makhura, and Fikile Mbalula fell victim to a delayed train. Maimane said the president experienced firsthand what many South Africans faced due to his failing ANC government.

“The solution is simple,” he tweeted, “Dissolve Prasa and let provinces manage their own rail and ports.”

It wasn’t long before a poster was made.