The uprising was not spontaneous; there was an element of elite involvement in the violence, an analyst says, supporting the view of the ATM party. 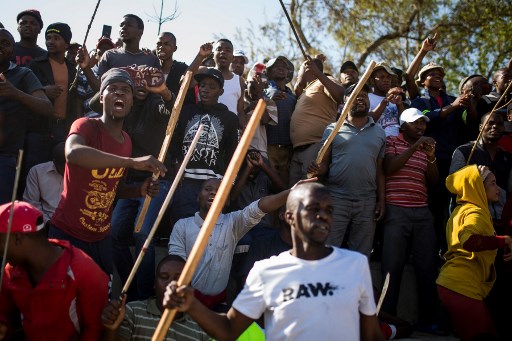 The DA says Gauteng government needed to build inclusive communities where residents benefited from each other instead of 'segregating people on the basis of nationality'. Picture: AFP

The wave of violence sweeping through Gauteng could have been deliberately designed to sink President Cyril Ramaphosa’s administration and to reduce pressure on leaders tainted in the Commission of Inquiry into State Capture, political analyst Andre Duvenhage has claimed.

“We have been dealing with the issues of (anti-foreign-sentiments) blamed for unemployment, crime and drugs for the past 10 years. Why now when Ramaphosa had just returned from an important forum like the G7 (summit) where he took his investor drive?” he asked.

Duvenhage said it was also worrying that the violence erupted at the time when Ramaphosa was hosting more than 1,000 regional and global leaders at the 28th World Economic Forum on Africa in Cape Town.

The uprising was not spontaneous; there was an element of elite involvement in the violence and people did not just wake up and decide to burn their town – these attacks were well planned, Duvenhage said.

The collapse of the crime intelligence made the attacks easy to plan and execute because the intelligence had no operatives in the hostels from where these attacks were carried out.

According to Duvenhage, who is also research director at the University of the North West, said “there must be an elite involvement” because there must be some form of trigger.

“This is part of the fight-back strategy… there is a lot of pressure on those fingered at the Zondo commission and we are going to see a lot of these (uprisings). Big things do not just happen without politicians involved. On the other end, it boils down to mass uprising by people dissatisfied with the government.”

Duvenhage said the current diplomatic spat between Lagos and Pretoria, heat on SA’s companies on the continent and international condemnation was exactly what the instigators wanted, as it embarrassed Ramaphosa and could scupper his investor-seeking efforts.

Mxolisi Makhubu, African Transformation Movement (ATM) spokesperson, said they strongly believed the unrest was a manufactured conflict, aimed at driving a wedge between South Africa and its neighbours.

Two of the 12 people killed in the violence, which left a trail of destruction in Pretoria, Johannesburg and surrounding areas, so far have been identified as foreign nationals.

The violence has stirred tensions between Nigeria and SA, with Nigerian authorities embarking on a process of repatriating 600 of its nationals. Estimates are that there are 100,000 Nigerians in SA.

According to Dakar Mouhamadou Kane, ENACT project researcher, most of the tons of methamphetamine, a highly addictive drug manufactured in Nigeria, was exported to SA where 1kg sells for up to R163,000.

Writing in yesterday’s edition of Institute of Security Studies’ online journal ISS Today, Kane indicated a boom in Nigeria’s meth output, with the quantity of meth seized increasing from 177kg in 2012, to 1.3 tons in 2017.

Ramaphosa: Without accountability, trust in government is broken
12 hours ago
12 hours ago

Ramaphosa: Without accountability, trust in government is broken
12 hours ago
12 hours ago