Bloem said the party could not understand why Mkhize had allowed these 'traps' that could kill those who used them. 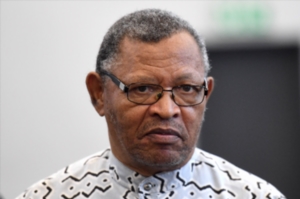 The Congress of the People (Cope) has welcomed government’s about turn regarding sanitising booths/tunnels, which according to the Ministerial Advisory Council should not be permitted.

On Saturday during a briefing on level 3 restrictions, Transport Minister Fikile Mbalula advised that sanitation booths would not be allowed for commuters after the World Health Organisation advised against them.

This was after a concern raised by Professor Salim Abdool Karim, the chairperson of the Ministerial Advisory Committee on Covid-19 on Friday, where he said: “Human spraying is harmful with almost no benefit.”

In noting the committee’s recommendation, Cope national spokesperson Dennis Bloem said the party could not understand why Health Minister Zweli Mkhize had allowed these “traps”  that could kill those who used them.

“We are aware that some schools in Tshwane have purchased these human disinfection tunnels in preparation for the reopening of schools on the 1st of June as part of the sanitising measures.

“Cope is calling upon Minister Mkhize to immediately ban the use of the human disinfection tunnels not only at schools but anywhere else in the country.

“We must do everything possible not to allow scrupulous fake scientists and experts to put the lives of our children, educators, education personnel and society in danger.”

With more industries resuming operations and learners returning to school, Mbalula said the transport sector needed to be responsive to enable the mobility of both workers and learners.

“In doing so, we must maintain a delicate balance between enabling mobility and arresting the spread of the virus. Our commitment to the preservation of human life above all else is informed by our constitution, which enjoins us in ensuring that the right to life is non-negotiable and therefore supersedes all other rights.

“The consultations we have held with industry bodies, across various modes of transport, have given us confidence that the majority of the sector is ready to resume operations with strict adherence to health protocols.”

He said they had taken note of advisories from the World Health Organisation and department of health discouraging the use of sanitising booths due to the health concerns.

“We will ensure that these are not utilised at our transport facilities.

“So tough luck to those who thought this is good business, they will have to think of other innovations.”