Malema says his party is being used to legitimise decisions: 'We will no longer be participating in those type of meetings because it’s a waste of time.' 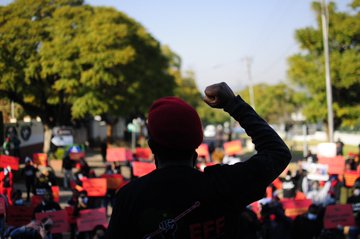 EFF leader Julius Malema in Pretoria during a #blacklivesmatter protest.

Malema said this was because Ramaphosa was using political parties to legitimise the government’s decisions to implement “nonsensical” regulations.

“The President doesn’t listen to us. He is calling virtual meetings to neutralise us and pretend to be listening. The issue of alcohol, we raised it sharply in the meeting and we demonstrated why it is dangerous to open alcohol,” Malema said, speaking to journalists in Pretoria on Monday.

Ramaphosa has been holding consultative meetings with various stakeholders including political party leaders represented in Parliament on government’s interventions to curb the spread of the virus.

The country has been under lockdown since March when the government adopted a five-alert level plan that allows for the staggered reopening of the economy.

In one meeting, political parties sought to sway Ramaphosa against the sale of alcohol, physical sittings of Parliament, resumption of domestic travel and opening of churches, News24 reported.

Ramaphosa has often said these consultations have helped government in formulating its lockdown regulations.

Ramaphosa and his Cabinet were widely criticised in April when he announced that the ban on cigarettes would be lifted and this was later recanted by Cooperative Governance Minister Nkosazana Dlamini-Zuma.

“When you announced cigarette [sales] members of the National Command Council were not in agreement, that is why you had to be embarrassed. It means there is a kitchen cabinet somewhere. We are used to legitimise those kitchen cabinet decisions. We will no longer be participating in those type of meetings because it’s a waste of time. Ramaphosa doesn’t listen to us, he listens to those who gave him money to become President,” Malema said.

The EFF leader added that he was encouraged by government’s cooperation with political parties when the consultations started in March.

“The President doesn’t listen to us. He is calling virtual meetings to neutralise us and pretend to be listening. The issue of alcohol we raised it sharply in the meeting and we demonstrated why it is dangerous to open alcohol,” he said.

“All the things we said on the first meeting were implemented but that was to the exclusion of white monopoly capital. Then they moved in and started disregarding the unity of political parties, Cabinet and the unity of South African people, who were very supportive of the initiatives. They didn’t realise how this [regulations] will impact on their profits. When it hit them hard in their pockets, they now started telling him what to do and he undermined that unity of purpose,” Malema added.

On 13 May, Ramaphosa announced a further easing of the lockdown, an increase in economic activity, and that the country plans to move to Level 3 at the end of the month.

Ramaphosa warned that more relaxations would come with a greater risk, as more people interact with one another, and greater vigilance will be required.

The new level will allow for a wider opening of the economy, but the government first has to meet with stakeholders in high-risk areas to discuss the way forward.

Government faces a number of court cases challenging aspects of the coronavirus lockdown regulations, such as the sale of cigarettes, the military-enforced night curfew and the restriction on exercise hours.

The DA and Freedom Front Plus are among opposition parties that have turned to the courts to challenge government’s regulations, News24 previously reported.