Zuma supporters defiant despite a week of setbacks

A series of corruption allegations of abuse at State Security Agency were made against Zuma this week. 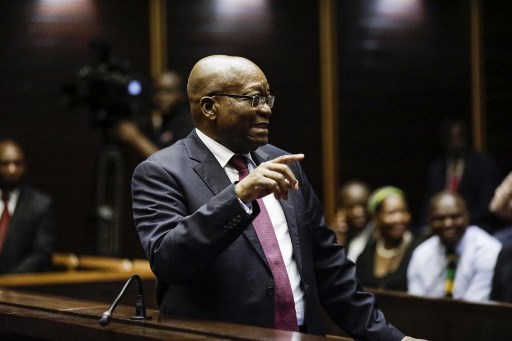 Former President Jacob Zuma supporters remain undeterred, despite a series of corruption allegations and a legal setback suffered this week by Zuma.

On Saturday morning a hashtag was trending #wearejacobzuma on Twitter with his supporters showing signs of defiance.

Zuma suffered a legal setback on Thursday after Justice Chris Jafta at the Constitutional court ruled that he honours the summons and directives to appear before the Zondo commission, and give evidence on dates determined.

We stand with Jacob Zuma because we understand his vision for Black South Africans. #WeAreJacobZuma

During the course of the week, Zuma was at the centre of a series of allegations made by Former Minister Sydney Mufamadi, Director-General Loyiso Jafta, and two unidentified witnesses SSA ‘Miss k’ and ‘Mr. Y.’

He is said to have pocketed millions of Rands from the agency’s special operations unit between 2015 and 2017.

Jafta alleged that there was simply no respect for the law and the constitution at the agency under Zuma’s era.

Miss K, gave her testimony at the Commission of Inquiry into State Capture and revealed names of the alleged spooks who she says helped former President Jacob Zuma to serve his own interests through the State Security Agency (SSA.)

She was also making references to an affidavit by ‘Mr. Y’ who could not testify because of health reasons.

Miss K’s testimony echoed those Jafta and Former, and Mufamadi in alleging that the agency faced financial abuse under the leadership of Zuma.

#WeAreJacobZuma AKUJIKI! And Jacob said to Juda , You are the strongest of them all. You’re a Lion awuhlehleli emuva ! And we are Juda the Son of Jacob !!!! pic.twitter.com/7Tx3T0XL1l

She said that the abuse of the agency and its mandate occurred primarily under the leadership of Siyabonga Cwele, David Mahlobo, and Advocate Bongani Bongo.

She went on to reveal that Maruti Nosi, Ambassador Thulani Dlomo, and Arthur Fraser were the main implementers of the alleged capture to help Zuma serve his interests.