The ANC wants the police to arrest and charge the organisers of Saturday's 'deliberate' breaking of lockdown regulations on some beaches in the province. 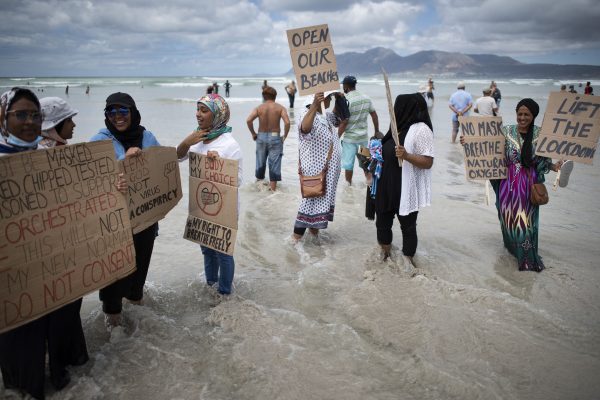 Demonstrators hold banners during a protest at the beach in Muizenberg against the government's ban on people enjoying the beach, in Cape Town on January 30, 2021. The ban is part of the South African government's Level 3 lockdown regulations due to the Covid-19 pandemic. (Photo by RODGER BOSCH / AFP)

Western Cape Premier Alan Winde has defended protesters calling for beaches to be reopened in the province.

He said the ban was costing the Western Cape in excess of R100 million a month.

Winde was speaking amid calls from the ANC in the Western Cape for provincial police commissioner Lieutenant-General Yolisa Matakata to order an investigation.

The ANC wants the police to arrest and charge the organisers of Saturday’s “deliberate” breaking of lockdown regulations on some beaches in the province.

The call comes in the wake of a protest at Muizenberg beach, where about 500 people descended to protest against Level 3 lockdown regulations with regard to the beach ban.

The protesters threatened to continue with their protest until the beach ban was lifted.

Winde said the Western Cape government supported calls for the lifting of the “nonsensical” beach ban.

“The Western Cape government does not support the ban on beaches and other open, outdoor spaces, and I have consistently argued against it at every opportunity. It is not based on good scientific advice as outdoor areas with good ventilation are safer.

“I will again argue strongly for this ban to be lifted urgently at today’s President’s Coordinating Council meeting,” said Winde.

Winde added: “It is estimated that this beach ban is costing the Western Cape in excess of R100 million every month, and it will destroy jobs at a time when we desperately need to be creating them.

“I am also concerned that continuing with a ban that is not based on science and basic common sense is eroding trust in government, at precisely a time when trust is vital for the successful rollout of vaccines.

“This is clearly demonstrated in the protests yesterday, where people feel like they have no other choice to have their voices heard. The national government should take this seriously. With that said, our government supports the rule of law, and we are opposed to any person breaking the law.

“We promise our residents that we are doing whatever we can to have this nonsensical ban removed as soon as possible.”

In a statement, the ANC said it wanted an explanation from SAPS as to why there were no officers on duty at Muizenberg on Sunday when bathers frolicked in the sea in a brazen violation of lockdown regulations.

The response will be added when received.

The ANC said it considers Saturday’s beach protests a deliberate attempt to undermine the national government’s attempt to save the economy and South Africa from the being further devastated by Covid-19.

The party in a statement released by Lerumo Kalako and Ronalda Nalumango: “The Western Cape is not a renegade province, with Cape Town as its capital: it is part of South Africa. We call on the provincial commissioner to order the arrest of the organisers and to ensure that they appear in court without delay.

“We also call on them to get the maximum penalty for breaking lockdown regulations and for inciting others to break the regulations.”

The party added that, by deliberately occupying beaches in defiance of lockdown regulations, those behind these protests created potential super-spreader events, the results of which could result in more Covid-19 cases.

“We were not entirely surprised that the DA-led City of Cape Town and the provincial government did not call on the organisers to cancel their protest.

“This silence once again exposes the DA’s hypocrisy: they are quick to jump up and down when ANC members violate the regulations, but retreat behind a collective silence when some break the regulations in the Western Cape.”

The ANC is a latest political party to weigh in on the beach protest after EFF slammed the police and City of Cape Town for “standing by” while lockdown regulations were being flouted.

City of Cape Town law enforcement spokesperson Wayne Dyason said the police were the “leading agent” during the protest, and that the City’s law enforcers had taken directions from them.

WATCH: How 'dark kitchens' are taking over the restaurant scene
9 hours ago
9 hours ago

WATCH: How 'dark kitchens' are taking over the restaurant scene
9 hours ago
9 hours ago