The DA said that new evidence suggested that the video combined old and new interviews, some of which happened 'before the pandemic or before wearing masks were mandated.' 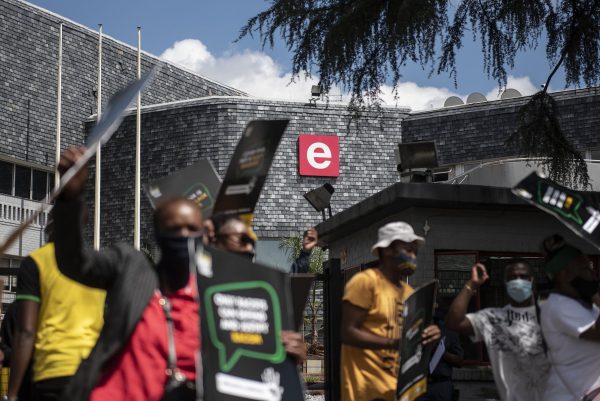 Supporters of the ANC demonstrate outside the offices of ENCA, 2 March 2021, in Hyde Park, Johannesburg, over alleged racism by reporter Lindsay Dentlinger during a recent broadcast. Picture: Michel Bega

The Democratic Alliance (DA) will take the ANC and the EFF to the South African Human Rights Commission (SAHRC) for “race-baiting.”

This is after the ANC’s Deputy Secretary-General Jesse Duarte led a protest outside the news station eNCA calling for the broadcaster t act against its journalist Lindsay Dentlinger.

Dentlinger made rounds on social media this week when she appeared in a video asking for black members of parliament to wear masks during an interview while she did not do the same with white MP’s.

ALSO READ: Lindsay Dentlinger: Who is really to blame?

This sparked a debate with some political parties suggesting that Dentlinger was “racist” and suggested that the Covid-19 disease was only among black people and not white.

The EFF called for the station to be boycotted.

The DA said that new evidence suggested that the video was an integration of old and new interviews which some of the segments were “before the pandemic or before wearing masks were mandated.”

“Earlier clips were used selectively in the montage to purport that white MPs were not asked to wear masks while black MPs were,” reads DA’s statement.

“Both the ANC and EFF have intentionally fed into this narrative to stir up tensions and play a very dangerous game – a game they have been playing for years without shame.”

The DA amounted to this to race-baiting and said that this had no place in the country’s democratic society.

“The race-baiting by the ANC and EFF has no place within South Africa’s democratic society.”

'Paul Kruger Must Fall': EFF calls on DA to remove statue
9 hours ago
9 hours ago

Digital Vibes: How Mkhize's aide splurged on Gucci, Smeg and a Turkey holiday
15 hours ago
15 hours ago

'Paul Kruger Must Fall': EFF calls on DA to remove statue
9 hours ago
9 hours ago

Digital Vibes: How Mkhize's aide splurged on Gucci, Smeg and a Turkey holiday
15 hours ago
15 hours ago