SA unrest: ANC veterans call on citizens to condemn all acts of violence

ANCVL president Snuki Zikalala has welcomed the deployment of the army to assist police in affected communities. 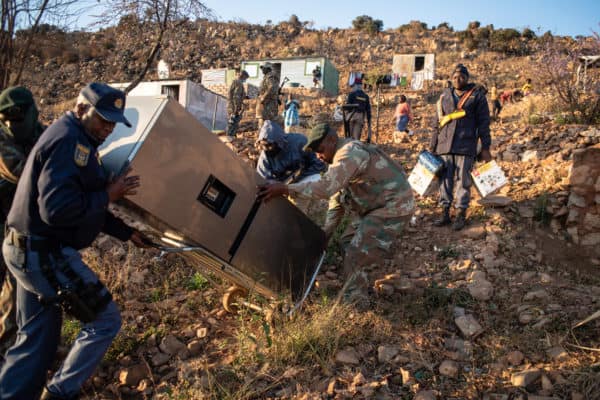 Members of the SANDF and Saps can be seen carrying a stolen fridge found in Mamelodi after they searched residents homes for items possibly looted from Mams Mall during the riots and unrest on 14 July 2021, Pretoria. Picture: Jacques Nelles

The ANC Veterans League (ANCVL) has strongly condemned the violence and looting that has gripped the country in recent days, calling on South Africans to condemn all acts of violence in their communities.

ANCVL president Snuki Zikalala on Thursday said the public violence and mass looting that has been centred in parts of KwaZulu-Natal and Gauteng and led to the deaths of more than 70 people, has not been seen since the advent of the country’s constitutional democracy.

“Poor people and law-abiding citizens have been threatened and they are scared that they may not be able to return to work and fend for their families.

“This unwarranted and wanton violence affects every member of society. The sick are not able to visit the hospitals, vaccination programmes on Covid-19 vaccines had to be suspended in some areas as it was gaining momentum, health workers cannot get to work and food supplies have been affected,” Zikalala said in a statement.

He said the violence was instigated by individuals calling for resistance to the Constitutional Court’s (ConCourt’s) ruling in June that sentenced former president Jacob Zuma to 15 months in jail for contempt of court, and they have now been “joined by criminals and thugs”.

ALSO READ: High court dismisses Zuma’s application to get out of jail

The former statesman was found guilty of contempt for refusing to adhere to the ConCourt’s order to testify before the Commission of Inquiry into Allegations of State Capture.

On Monday, the ConCourt heard his rescission application challenging the sentence meted against him and judgment was reserved in the matter, while he remains behind bars at Estcourt Correctional Centre in KZN.

Zikalala said: “We should not allow counter-revolutionaries to derail our path to renewal. Those who have instigated and participated in the creation of the prevailing chaos and mayhem must be held accountable for their misdeeds.”

He said the ANCVL welcomed the deployment of the army to assist police in areas affected by the violence, with an additional 25,000 boots on the ground expected to bolster police operations.

The league also called on its members to engage with communities in a bid to persuade them to work with the police to stop the violence and looting.

“We call on all South Africans to unite and protect South Africa and work tirelessly for economic recovery and the social well-being of every South African.

“As the ANCVL, we take note and congratulate the seven provinces for having prevented and resisted the wanton looting. We would like to congratulate the law-abiding citizens and patriots for defending our constitutional democracy.”

Hostage case: 11 supposed military vets due in court for bail hearing
17 hours ago
17 hours ago

Hostage case: 11 supposed military vets due in court for bail hearing
17 hours ago
17 hours ago