Lungisa was seen in viral videos last week with a group from the taxi industry denouncing public violence. 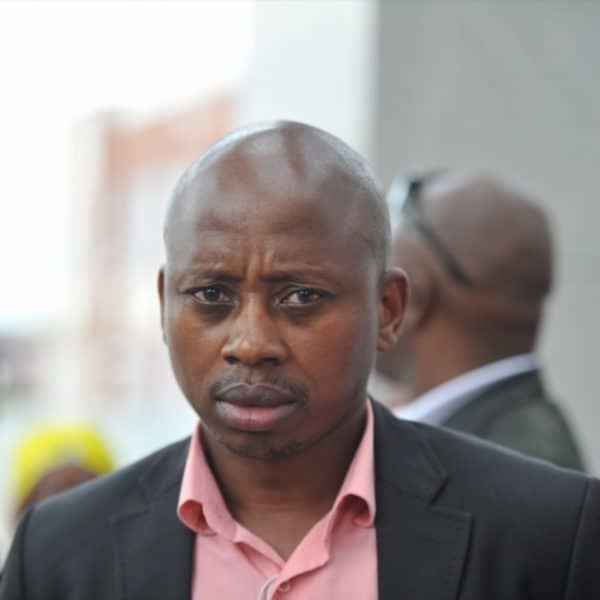 Former Nelson Mandela Bay ANC councillor Andile Lungisa outside the Port Elizabeth Magistrate's Court before the verdict on his assault case on April 17, 2018 in Port Elizabeth, South Africa. Lungisa was found guilty of assault with the intent to cause grievous bodily harm for smashing a glass jug over the head of former member of the mayoral committee Rano Kayser, during a Nelson Mandela Bay council meeting in October 2016. (Photo by Gallo Images / Netwerk24 / Lulama Zenzile)

He would appear in the Motherwell Magistrate’s Court on Friday, said Eastern Cape police.

Police spokesperson Brigadier Thembinkosi Kinana could not reveal what gathering Lungisa attended but the politician was seen in viral videos last week with a group from the taxi industry denouncing public violence.

He told News24 he was not aware how he broke the regulations but confirmed the charge.

The former Nelson Mandela Bay councillor is now threatening to sue the state for allegedly accusing him of trying to overthrow the government.

In a statement released on Tuesday, Lungisa claimed he was summoned and interrogated by crime intelligence and the Hawks on Monday for allegedly plotting a coup.

He said police investigators charged he was opposing the incarceration of former president Jacob Zuma and he played a role in the apparent insurrection attempt.

Lungisa’s allegations come as the police are cracking down on the alleged instigators of the violence that left a trail of destruction in KwaZulu-Natal and Gauteng last week.

The police previously announced they were pursuing 12 instigators of the violence.

So far, six people have been arrested.

The number of people who have died during the violence now stands at 183. There were no reported incidents of looting in the Eastern Cape but there were attempts.

The charges against Lungisa come a week after he was hunted down by taxi operators in Gqeberha who accused him of inciting violence in the province.

He said while he was supportive of the protests against Zuma’s “unjust” arrest, he had never advocated for any violence.

“The current government has decided to recklessly characterise the protests that turned violent against the unjust arrest of [former] president Jacob Zuma to have been an attempted coup. The initial prognosis of the unrest by the government was that of ‘ethnic mobilisation’.

“They were forced to abandon that careless and divisive characterisation by events and backlash from wider society. Coup attempt appear to be where they’re prepared to sacrifice what’s left of their credibility,” added Lungisa in a statement.

He said the two organs of state, the Hawks and Crime Intelligence, accused him of having assembled an arsenal for the purpose of overthrowing the state.

“This is of course an outright lie. Not only is this allegation baseless, I have never handled a weapon in my life. The next charge was that I broke Covid-19 regulations that are routinely broken by millions of people in the country and the offending parties are usually penalised with a fine if the police pursue them.”

Lungisa claimed he even offered the interrogating officers his phone to download whatever information could assist them in their investigation, but they declined.

He said he had been charged with contravening the Disaster Management Act relating to Covid-19 regulations.

“I will of course continue to fight against this attempted intimidation and criminalisation of political dissent. I will sue the state if they harm my reputation by painting me as a coup plotter.

“It would have been interesting for the state to make the charge of ‘insurrection’ because it would have given me an opportunity to cross-examine the politicians that have caused all this anarchy,” added Lungisa.

News24 sent questions to the government and the national offices of the Hawks and police to confirm the interrogations and react to legal threats from Lungisa but the institutions were tight-lipped.

Their comments will be added once received.

We will not participate in any future alcohol bans, say liquor traders
1 week ago
1 week ago
PREMIUM!

We will not participate in any future alcohol bans, say liquor traders
1 week ago
1 week ago
PREMIUM!