The party has also called for Ramaphosa to get rid of the State Security Minister. 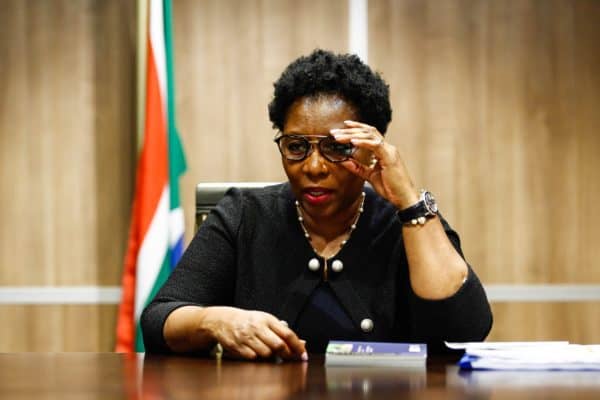 Former Public Services and Administration minister Ayanda Dlodlo during an interview on August 18, 2018 in Pretoria, South Africa. As part of governments means of cutting costs, Dlodlo warned that the cabinet would be reduced and the appointment of ministers would come down to survival of the fittest. (Photo by Gallo Images / Sunday Times / Moeletsi Mabe)

The Democratic Alliance (DA) is set to submit a Promotion of Access to Information Act (PAIA) application to State Security Minister Ayanda Dlodlo in an effort to access the intelligence report over the recent civil unrest.

In light of the violent protests and looting in parts of KwaZulu-Natal and Gauteng, Dlodlo revealed that the State Security Agency (SSA) had an intelligence report on the riots prior to the incidences occurring.

Dlodlo and Police Minister Bheki Cele have recently been at odds over whether the South African Police Service (Saps) was provided with intelligence reports about the violence that left more than 300 people dead, with Dlodlo insisting that police had such information.

However, Cele has disputed Dlodlo’s claims.

The matter has prompted the DA to submit PAIA application for Dlodlo to reveal the report.

“It is critical that South Africans know the who, when and what of this catastrophic failure of our security cluster to protect citizens and property: Who knew upfront about the looting and unrest, when did they know it, and what did they then do about it?

Steenhuisen also indicated that Cele could be in contravention of the National Strategic Intelligence Act (NSIA) if he did indeed receive the intelligence report on the riots and failed to act on it.

“Minister Dlodlo should therefore publicly release the intelligence report which she claims were made available to law enforcement, because such reports would likely reveal evidence of a failure to comply with the law by Saps [South African Police Service]. And this would most certainly be in the public interest,” he said.

The DA leader further said it was important for business owners who were affected by the looting to know on whether the losses suffered was a result of the police failing to act on the matter.

“If the intelligence reports reveal that they suffered these extensive losses due to a failure by Saps to comply with the law, then they should have recourse to legal action against Bheki Cele and other Saps officials,” Steenhuisen added.

He continued to say: “The statement by the acting Minister in the Presidency, Khumbudzo Ntshaveni, that it is not in the country’s interest to reveal what intelligence, if any, the police had prior to the unrest is simply outrageous.”

The DA’s application comes after the party also called for Ramaphosa to reshuffle his Cabinet.

This is due to ministers in the security cluster being at loggerheads over their contradictory messages on the unrest that Ramaphosa characterised as a “failed insurrection”, following the incarceration of former president Jacob Zuma for contempt of court.

Both Mapisa-Nqakula and Dlodlo continuously insisted the violence had nothing to do with a coup.

This led to some political analysts suggesting that Ramphosa was “being betrayed by members of his Cabinet” while others blamed infighting within the ANC.

The DA argued that the president should have announced the immediate axing of Cele, Dlolo as well as that of suspended Health Minister Dr Zweli Mkhize, Mineral Resources and Energy Minister Gwede Mantashe during his address on Sunday night.

The party said the reshuffling was needed because “trust in Ramaphosa’s administration is at an all-time low”.

The Economic Freedom Fighters (EFF) has also called on Ramaphosa to fire Dlodlo for “misleading” the country and Parliament about the intelligence reports on the unrest.

The EFF indicated that it wrote to Dlodlo on 16 July, requesting that she provide evidence that her department possessed such intelligence and forwarded it to Saps, but she had not responded to their questions.

Despite this, the party said it could confirm that such information was never shared or given to Parliament’s joint standing committee on intelligence, as well as Saps, even though officials of the SSA have said so.