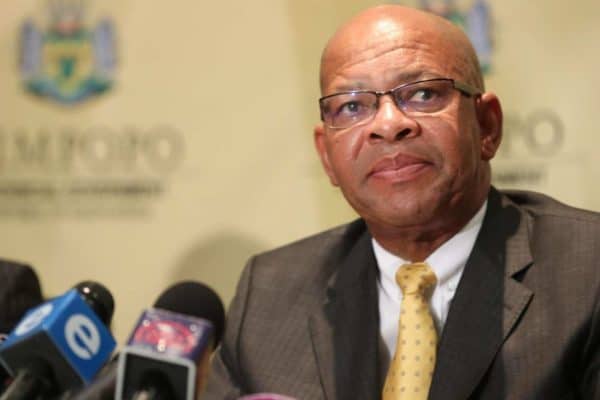 Moraka, who is a former ANC Youth League deputy secretary-general, has been accused of having received R600,000 from a company contracted to provide services at power utility Eskom.

The money was allegedly directed by a former corruption accused senior Eskom official to be deposited into Moraka’s personal business account.

It was apparently deposited into the account of a company called Farlogyn, in which Moraka is believed to have been a director since 2016.

The payment was supposedly for stakeholder management and subcontracting services.

“Due to the fact that these allegations are brought to our attention for the first time, Premier Mathabatha has last week mandated the director-general, Mr Nape Nchabeleng, to commence with investigations,” said Mathabatha’s spokesperson, Willy Mosoma.

Mosoma said the province would then wait for the outcome of the investigations, which would determine the appropriate way forward on the matter.

Moraka was appointed MEC in Mathabatha’s Cabinet in 2018 soon after her predecessor, Onicca Moloi, resigned from her position via Facebook.

Moraka does not deny she received the money and maintained it was a loan from a friend and she was in need at the time.

She said she needed the money to pay for accommodation expenses and other vital logistics as she was forced to relocate from Limpopo to another province.

But this did not convince opposition parties in the province.

The opposition accused Moraka of contravening a policy that forbade government officials from doing business with government or state organs.

“This is a blue lie. There is no such thing called a loan. Moraka must just prove beyond any shadow of doubt, with tangible documented proof, that the money was indeed a loan,” said DA Limpopo leader Risham Maharaj on Wednesday.

“It is worrying that while the papers state that the money was for subcontracting services, she claims she doesn’t recall doing business with Eskom.

We cannot afford to have leaders with questionable reputation and who continue to use their powers to milk the coffers of our government dry,” Maharaj said.