The singing Tembisa crowd chanted Phantsi ngo Pat (down with Pat), with some of the placards held reading: “Enough is enough” and "no vote." 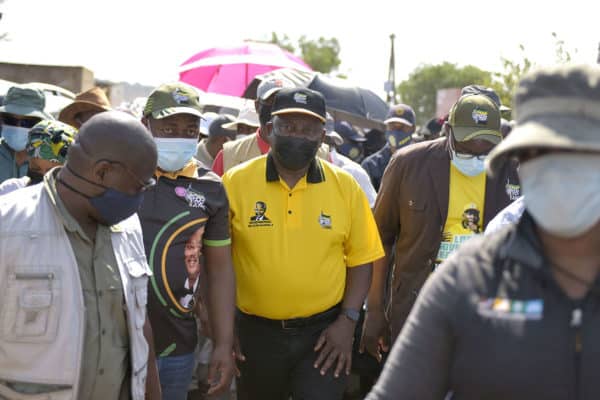 Emerging from a local ANC briefing at Thembisa’s Ward 6, Ramaphosa had to address a disgruntled group of singing and placard-carrying ANC supporters, unhappy about the choice of ward councillor Pat Tleane in the upcoming local government polls.

Said Ramaphosa: “You have told us about the problem of your ward candidate and we have listened.

“You are not happy with the candidate and we are going to investigate it and sort it out.

“Now you need to work for the victory of the ANC in these elections by campaigning for the party to win in this ward.

“We will resolve your concerns after the elections. Please change the message in your posters.”

An enraged Tleane earlier attempted to disrupt a television interview with a leader of the group gathering at the George Nyanga Drive.

The singing crowd chanted Phantsi ngo Pat (down with Pat), with some of the placards held reading: “Enough is enough”, “We want answers” and “No vote”.

“The branch secretary put a candidate chosen by himself and not the people of Thembisa.

“The people do not want this candidate who did not even go through the ANC interviewing process,” said Joseph Langa.

After resolving a tense moment at Ward 6, things became easier for Ramaphosa at Ward 3.

Expressing appreciation at meeting Ramaphosa, the self-employed father told The Citizen: “He (Ramaphosa) asked me about how many people live in the house and outbuildings, He was interested in problems we were encountering.

“I told him I was staying here with a family of seven people.

“I told him we have enough rooms for everyone but just need- ed government help with an RDP house.

“Fixing ceilings and doing painting of homes around here is what I do for living.

“I am going to vote for the ANC in the upcoming elections because I have not encountered any problems.”

At Mazibuko Street, mother of three Deffney Mashao, whose family had an audience with Ramaphosa and were offered ANC T-shirts, said: “I am so happy for President Ramaphosa to have visited our home because it was easy to interact with him.

YOU MIGHT ALSO LIKE: ANC ropes in mini Madiba magic in attempt to make Western Cape inroads

“We had a rare opportunity of telling the president our problems, which included widespread joblessness.

“I am unemployed and rely on money I make by renting out rooms.

“I told him that the government has to build more RDP houses for people to own, which would be better than paying me rent.

“In that way they can be empowered, which is not always about handouts from government.

“We were happy to meet him because one day you do not think it is possible to meet someone at the level of the president.

ANC withdraws coalition agreement in Kannaland over re-election of rapist mayor
1 day ago
1 day ago
PREMIUM!

ANC withdraws coalition agreement in Kannaland over re-election of rapist mayor
1 day ago
1 day ago
PREMIUM!