‘DA has already showed us the middle finger’ – Herman Mashaba

Herman Mashaba of Actions and the joint collective of political parties that have committed to keep the ANC out feel insulted by the DA. 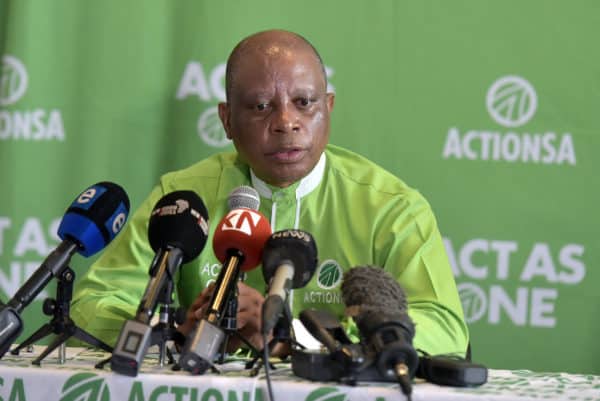 The Democratic Alliance (DA) seems to have done an about-turn with regards to what was discussed between the “smaller parties” behind closed doors after the local government elections and no one is more annoyed by this than ActionSA’s Herman Mashaba.

Mashaba spent the better part of his Saturday alternating between tweeting incessantly and speaking to the news media about the DA’s statement delivered by party leader John Steenhuisen.

He announced that the DA plans to put forward its own Johannesburg mayoral candidate on Monday, citing the reason that putting ActionSA in charge of a Johannesburg minority government would put the coalition at the mercy of the EFF.

The party’s backing Herman Mashaba, however, says the DA risks putting the ANC in power through their decision.

In a statement released on Saturday, DA leader John Steenhuisen said the proposal that the DA should head up the Tshwane coalition, while ActionSA leads the coalition of opposition parties in Joburg is not as simple as the statement released by ActionSA and other parties on Friday makes it sound.

“The reality is much more complex,” Steenhuisen said.

A joint statement by ActionSA, FF Plus, UDM and the ACDP claimed that the DA’s decision put “successful coalitions at risk.

Referring to themselves as the “joint collective of political parties that have committed to keep the ANC out of government,” the parties expressed their disappointment at the DA’s statement.

The parties are particularly incensed by the fact that the DA communicated their position (and dismissal of these parties’ request) without any prior communication to coalition partners.

Chief among these parties’ requests was the request to have Herman Mashaba play mayor in Johannesburg.

ALSO READ: Backing Mashaba as Joburg mayor would give EFF too much power, says DA

“The multi-party group has no understanding of the DA’s intentions from this point on. It would seem that the DA will proceed to Council meetings next week without formal agreements with coalition partners that offer any comfort to the residents of these municipalities,” read part of the statement.

They concluded their statement by calling on the DA to honour its commitment to keep the ANC out of the municipalities that these parties were elected in. According to these parties, the only way to do this is by “engaging with potential coalition partners in good faith.”

Leaders of some of the parties concerned also took to social media to share their thoughts.

After being dragged into the fray, Helen Zille commented on the matter, stating that the DA believes entering into a coalition with the EFF would be a disaster.

“We have very deep foresight, and we learn from experience. We will not be lured into a minority coalition that depends on the EFF, because we have learnt from hindsight. That coalition was a disaster in 2016, and it will be a disaster again in 2021.”

Sentiments echoed by Steenhuisen who said the DA would not “enter into an unstable, chaotic, unprincipled coalition that has to kow-tow to the EFF to stay in office.”

After a series of tweets in response to Zille’s claims, Herman Mashaba then declared that the DA had shown them the middle finger by taking the position that they did in Steenhusen’s statement.

READ NEXT: Herman Mashaba doesn’t want to be mayor, only wants to keep ANC out of power

ID's Cronje was under political pressure to charge EFF leaders, claims Malema
18 hours ago
18 hours ago

ID's Cronje was under political pressure to charge EFF leaders, claims Malema
18 hours ago
18 hours ago