The municipality said city services should be fully operational before the end of the week, with workers returning to their posts on Thursday. 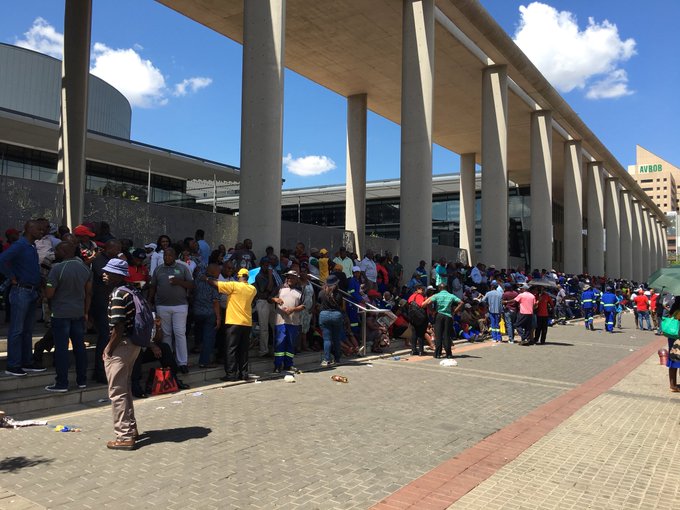 Scores of municipal workers gathered outside Tshwane House in Pretoria to protest for benchmarking of wages, 13 November 2019. Picture: Twitter

The City of Tshwane has confirmed it has reached an agreement with workers over the benchmarking of wages.

The confirmation comes after municipal workers took to the streets, blocking and barricading them with municipal vehicles and rubbish from bins on Wednesday.

They were awaiting the outcomes of negotiations between the City and labour unions.

Commuters had to change their routes around the capital city as workers gathered outside Tshwane House. Madiba, Van der Walt and Thabo Sehume streets were gridlocked.

The City suspended the Tshwane Bus Services (TBS) on Monday, as workers were reportedly unhappy with the pace at which the process of benchmarking salaries was taking place.

The process was announced in July, following a week of demonstrations and interruption to service delivery in the capital.

In a statement released after 13.00pm on Wednesday, the City said a Labour Law Forum (LLF) sub-committee – made up of representatives of the City and unions – was working to finalise the specific levels and the implementation dates of the benchmarking, as per the resolution of council.

Mayor Stevens Mokgalapa’s spokesperson Omogolo Taunyane said, at the back of the benchmarking process, was a long-delayed process of rationalising the remuneration regime of the City since the municipalities merged from 2011.

The municipality said city services should be fully operational before the end of the week, with workers returning to their posts on Thursday.

The City said it would release a statement later, setting out more details of the plan.

It has apologised to residents for the disruptions and asked that they be patient as it tries to resolve the impasse.