The police watch dog is investigating a number of incidences across the country as violent protests continues. 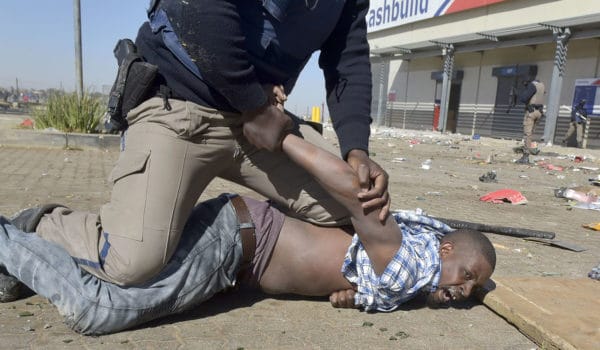 Police arrest a looter at Mayfield Square in Daveyton, 13 July 2021 Police were extremely over extended and arrested a large number of looters, but they simply couldn't cope with the sheer numbers. Picture: Neil McCartney

The Independent Police Investigative Directorate (Ipid) says it has been unable to access crime scenes and bodies in incidents where people are alleged to have died as a result of police action due to the ongoing unrest.

On Tuesday, the police watchdog said that SAPS was under strain, and in one incident, investigators were unable to reach the scene at a Shoprite in Inanda, KwaZulu-Natal, where a person had died after rioters attacked their vehicles.

“In this regard, the department calls on the members of the community to understand that the IPID investigators are not able to attend crime scenes of cases report”d to us, as well as reaching the deceased bodies, due to the chaos in the areas where protests are taking place,” said Ipid.

In another incident, Ipid said that it had received information that a person had died due to loss of blood because an ambulance could not reach them.

In another incident, “Ipid found a hand grenade at a First National Bank ATM in Inanda and would need to access the area, together with the bomb unit of the SAPS.”

The watchdog body said that it was also investigating the death of a matric pupil who was allegedly shot by police at Meerensee in Richards Bay.

“To this end, Ipid is following up in order to establish the authenticity of the information or incident itself. The department calls on the members of the community who may be aware of or know of such an incident to urgently contact our office and register the case. The department will issue a full report on cases received during protests and report on the ones which fall within the Ipid mandate,” it said.

Ipid also urged police to continue to manage the situation within the ambit of the law and to avoid any potential loss of lives.