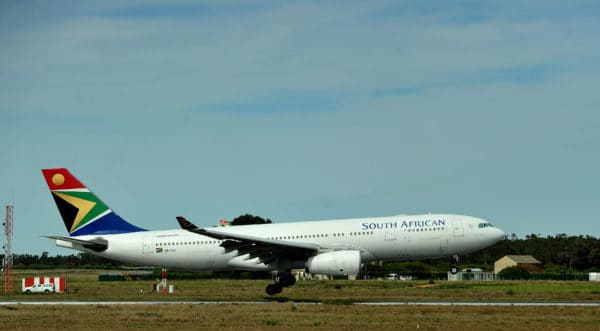 The SAA A330 aircraft lifts off at airport on 4 September 2018 in Port Elizabeth. Picture: Gallo Images / Netwerk24 / Lulama Zenzile

South African Airways (SAA) workers have accused the airline’s management of subjecting them to “slavery conditions” after their wages were cut by more than 30%, among other issues.

The workers, who are represented by the National Union of Metalworkers of South Africa (Numsa) and the South African Cabin Crew Association (Sacca), are currently picketing outside SAA’s office in Kempton Park over dissatisfaction with their employment conditions.

The workers have also expressed their unhappinesss with SAA’s interim chief executive officer Thomas Kgokolo, who the unions have accused of being unwilling to engage with them.

Speaking to the media on Tuesday morning, Sacca spokesperson Zazi Nsibanyoni-Mugambi said the workers were embarking on a picket to hand over a petition to management outlining their concerns.

“[The workers are not happy] because of how they are being treated in this new SAA. This was meant to be a new start… a fresh start and the CEO calls it ‘Team SAA’ while in fact it’s not ‘Team SAA’.

“Our members are suffering… they feel like they being treated in slavery conditions. Their salaries have been down buried to less than 35% while management and the upper echelon have taken increases.

“[The workers] are simply here and have put their names on a petition to ask SAA management to take their pleas seriously and engage with the unions in order to find a resolution,” she said.

Nsibanyoni-Mugambi said the workers were not afforded lunch breaks or shift allowances.

“The SAA management has basically taken the conditions that [the workers] had before… sliced them by 35% and [said] here ‘work, be grateful for your jobs’. [But] that’s not we signed up for,” she added.

SAA has since responded, saying while it recognises and respects the rights of people to protest, “the carrier is not able to revert to prior agreements reached before business rescue”.

The airline said it was of the view that all new agreements reached with parties were negotiated fairly and equitably when the business rescue process was ongoing.

The carrier added that it was “always open to constructive dialogue” with the unions.

It further assured its customers that operational schedules were not affected by the protest.

Last month, SAA resumed operations with its first flight – from Johannesburg to Cape Town – since its 2019 business rescue process started.

The airline took to the skies again following “a large and complex transaction” between the Takatso Consortium and government.

The Takatso Consortium now owns 51% of the airline and the Department of Public Enterprises 49%.