Soweto residents have barricaded roads leaving residents stranded with no way to get in and out of the area. 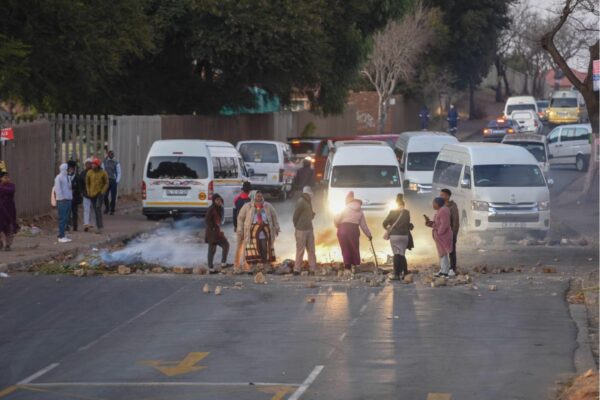 Soweto residents have blocked the roads of Pimville, Klipspruit, apparently due to lack of service delivery and ongoing electricity problems. Picture - Sibongumenzi Sibiya

Several roads in Soweto, south of Johannesburg have been barricaded following protest action in the area on Monday morning.

Residents have blocked roads with rocks and burning tyres and motorists are unable to enter or leave the Soweto area.

It is believed residents are protesting over problems related to Eskom and the removal of informal settlements.

They will be marching to deliver petitions to the City of Johannesburg Mayor Mpho Phalatse on Tuesday.

The march has been organised by the Pimville/Klipsruit Community Forum and Soweto Parliament.

Spokesperson Nobhala Nonkelela said they’ve had a surge in criminal activities in the Soweto area.

“It first started with cable theft and when we tried to address it as a community we reached a place where an informal settlement called Chicken Farm, that’s where these cables were being stolen.

“When we approached them, we negotiated and asked them to help us identify who are the people stealing these cables. They started shooting at us and one of us died.”

Nonkelela said there was an imbizo held on 28 April with Police Minister Bheki Cele, Phalatse and the MEC for Community Safety Faith Mazibuko to address the community’s grievances.

“While they were here we gave them an ultimatum to say you should do away with this informal settlement. Subsequently, if you don’t we will shut down Pimville. We have discovered that a lot of other locations in Soweto are suffering the same with informal settlements and Eskom cable theft, power cuts and intermittent power cuts.”

“JMPD officers have been deployed in areas around Soweto due to protest action. From the information we received, we know that Chris Hani Road in Pimville is currently closed to traffic between Maponya Mall and Modjadji Street. There is also disruption in Diepkloof Immink Drive.”

Fihla has advised motorists to exercise caution when travelling along these routes.

At the same time, scores of frustrated students at the Tshwane University of Technology’s Pretoria West Campus have embarked on an overnight protest action over the lack of hot water and electricity.

They barricaded the entrances to students’ accommodation facilities with burning objects.

The students claim they’ve been subjected to poor services by landlords who failed to pay power utilities for the past six months.