Hlaudi Motsoeneng admits he tried to pass matric at age 23, but failed

The former SABC boss said on Tuesday he's never lied about it, Madonsela was the one lying and he is capable of 'beating' anyone with a degree. 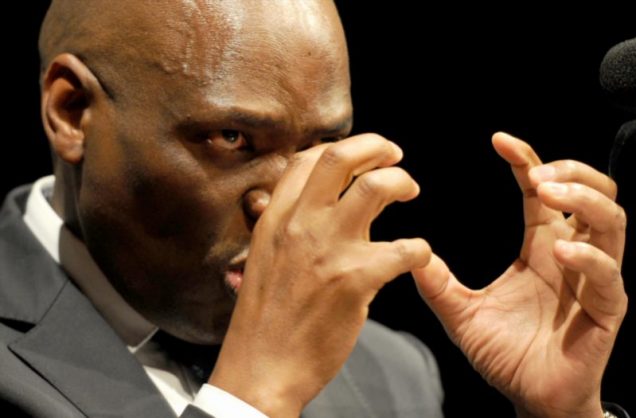 Former SABC COO Hlaudi Motsoeneng on Tuesday took to the witness stand at the commission of inquiry into state capture to defiantly defend himself against accusations that he had lied about having a matric qualification.

Motsoeneng is giving evidence relating to the public broadcaster and his time working for the SABC, which was steeped in controversy.

On Monday, former chair of the SABC board Dr Ben Ngubane told the commission that Motsoeneng was appointed because of his supposed people skills.

Ngubane told the commission that Motsoeneng was appointed though it was known he did not possess a matric certificate or a tertiary qualification.

Ngubane further denied at the commission that he had altered a job advertisement for the COO specifically to accommodate Motsoeneng.

On Tuesday, Motsoeneng told the chairperson of the commission, Deputy Chief Justice Raymond Zondo, that he feels insulted when media reports suggest that he had lied about being in possession of a matric certificate. He said even the public protector lied about him lying about his having completed his matric.

Motsoeneng told Zondo that when he had been head-hunted for working for the SABC he had declared that he did not possess a matric certificate, adding that the individual who had head-hunted him said that it was not an issue because he, Motsoeneng, was sufficiently talented and so did not think a matric was needed.

Motsoeneng said before joining the SABC permanently he was taken for a course to learn about broadcasting; he said he was the first person to attend such a course.

He further said there was no record of him saying that he had passed matric “because it is a well-known fact that I do not have matric”.

Earlier, when asked what position he occupied at the SABC, he gave the curious answer that it was all of them.

“Hey, I occupied all the positions, not just the board chairman,” he said.

Motsoeneng said he was a freelancer for the SABC between 1989 and 1994 and was permanently appointed in February 1995.

Soon after this, he admitted to “a lady” at the SABC that he had written examinations for Standard 10 (matric) but did not pass. He told the commission he did this as he was filling in a form soon after his appointment. He added that in the form he wrote that his standard 10 was “outstanding”.

He said the only people who can could he lied were his employers, and the person who had head-hunted him.

Motsoeneng said he did not know what was going through the then public protector Thuli Madonsela’s mind because when she interviewed him he had denied lying about lying about being in possession of a matric certificate.

At one point, he appeared to suggest that he had tried and failed to pass matric at the age of 23.

He said he considered himself highly educated due to his capacity and life experience and apparently told everyone with qualifications at the SABC that, “Me, I will beat you, I’m not afraid with your qualifications!”

Motsoeneng, despite having been accused of mismanagement and corruption while COO of the SABC, has long maintained that he did a great job at the public broadcaster.

“Hlaudi is a very good leader, Hlaudi is one of the best people,” he during a 702 interview after being confronted on his record at the broadcaster, adding that he was “an action man” who would get things done if he ever became president, a possibility the former COO appears to find far more likely than the average South African.

This was part of Motsoeneng’s response to a caller who accused him of having stolen from the SABC and said he must “hamba”.

“If I was corrupt I was supposed to be in jail,” he continued, “There are no Hawks, no police investigating Hlaudi.”

Motsoeneng formed his own party in December last year, the African Content Movement (ACM). They performed poorly in the May 8 elections this year, earning only 4,841 votes, much less than required for a seat in parliament.