Kevin Wakeford was granted permission to cross-examine him and the company’s former head of central business, Frans Vorster. 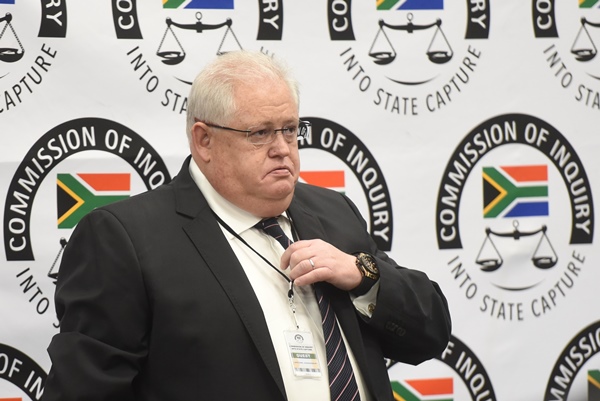 Former Bosasa COO Angelo Agrizzi prepares to give his testimony at the Commission of Inquiry into State Capture held in Parktown, 23 January 2018. Picture: Refilwe Modise

Former Bosasa COO Angelo Agrizzi is expected to return to the judicial commission of inquiry into state capture on Wednesday morning.

This comes after Armaments Corporation of South Africa CEO Kevin Wakeford was granted permission to cross-examine him and the company’s former head of central business, Frans Vorster.

Wakeford was among many people who benefited from Bosasa, according to Agrizzi’s testimony in January.

Senior ANC and former government officials were also not spared by Agrizzi during his testimony. Among those he implicated were ANC chairperson and Minister of Mineral Resources and Energy Gwede Mantashe, former minister Nomvula Mokonyane, former president Jacob Zuma’s ally Dudu Myeni, politicians, and unnamed journalists.

Agrizzi testified that Mokonyane was furnished with R50,000 a month in cash from Bosasa, meat and alcohol for family functions, maintenance to her home – including a garden service, repairs to electric fencing, and new camera systems.

He claimed he was present on one occasion when Mokonyane was handed a grey security bag of cash when she was Gauteng premier, between May 2009 and May 2014.

But Mokonyane claimed the allegations were false and she promised to testify at the commission.

She said the allegations were of a “serious nature, self-contradictory in many respects and are designed to cast aspersions of impropriety against me in my personal and official capacities”, News24 previously reported.

Speaking at a memorial service for former CEO Gavin Watson on August 30, Mokonyane threatened to tell the nation what Agrizzi had done.

But Mantashe rejected Agrizzi’s claims, saying he had “no dealings with Bosasa”.

In February 2019, Mantashe went as far as inviting journalists on a tour of his homes in Boksburg, Gauteng, as well as Cala and Elliot in the Eastern Cape.