According to Storm Report SA, Cyclone Kenneth could be one of the strongest cyclones to hit eastern Africa. 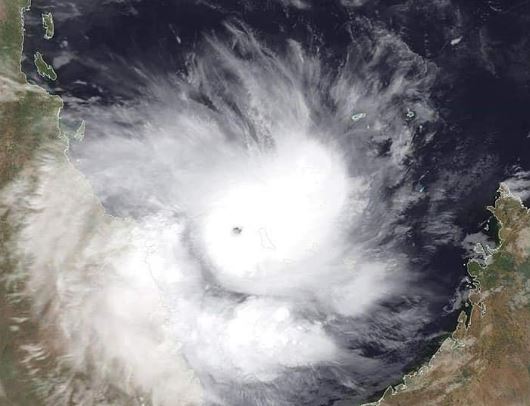 A clear eye can be seen in this image as Cyclone Kenneth reaches category 4. Photo: Storm Report SA

In a report by Storm Report SA, Kenneth is the 10th cyclone to reach that strength for this season, exceeding the ‘normal’ amount of around 2 to 4 in a good season in the Indian Basin.

“Kenneth features a very strong eye-wall as well as an extremely tight core and it is a very organised system. The cyclone may continue to intensify even further and it is already impacting the Comoros Islands and it’s forecast to make landfall in northern Mozambique on Thursday night,” the report read. It added that Cyclone Kenneth could possibly be one of the strongest cyclones to hit eastern Africa that close to the equator, and it will likely bring impact to Tanzania too, though the country rarely receives any tropical cyclone impact.

Storm Report SA says the accumulated total precipitation over northern Mozambique for the next five days is expected to be up to 150cm along the coastline over the Nampula and Cabo Delgado provinces.

Intense Tropical Cyclone #Kenneth is still tracking west and is expected to move over the north-eastern parts of Mozambique later today. Wind in excess of 200km/h is expected with heavy rain and flooding as well as storm surge along the coast. #Mozambique pic.twitter.com/4QU74eKLBB

“This heavy rainfall will be produced by Tropical Cyclone Kenneth and it’s expected to make landfall late Thursday night, after which it’s expected to stall over the country, drenching the above-mentioned provinces. The southern parts of Tanzania will also be affected, with up to 500mm of rain expected in places,” the report concluded.

Last month, Mozambique was hit by Cyclone Idai, which brought flooding, heavy rains and destruction in its wake.