The mini-tornado hit the settlement of Bainsvlei just outside Bloemfontein, blowing roofs off houses, uprooting trees and causing agricultural damage. 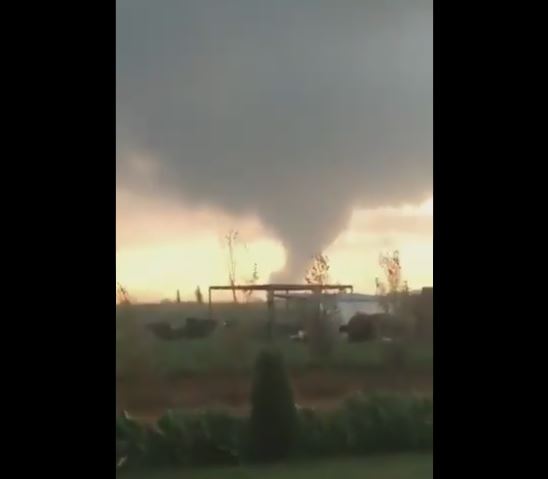 A family living on a farm in Bainsvlei, Bloemfontein had a few tense moments of their own on Election Day, after a mini-tornado ripped through the region, tearing the roof of their house off with force.

Betsie Geldenhuis told Bloemfontein Courant how she and her three daughters, who at that stage were the only people in the house, were terrified, and thought initially that it was just strong wind.

“Only when our neighbours showed us a video they took during the storm did we realise that it was much worse than we thought. Our neighbours even lost part of their house’s roof during the mini-tornado. Luckily no one was injured,” Geldenhuis said.

More footage emerging of the tornado about 20km from Bloemfontein on the R64 this afternoon. Sent in by Liezl en Hendrik Roodt pic.twitter.com/w68EMf1eyO

The storm hit the settlement at around 5pm on Wednesday. Geldenhuis said that she had already cast her vote when the tornado struck.

Sent in by Nelri Hugo.

It seems we had a tornado close to Bloemfontein. We are still investigating precisely where this happened. We did chase the storm but we must've missed this one. pic.twitter.com/D2fMvIMmx5

For safety reasons, Geldenhuis and her family stayed at her mother’s house on Wednesday night.

“There are people that guarded the house until we begin with reparations on Thursday,” she said.

In addition to the roofs that were blown off in the storm, trees were uprooted, and land where sunflowers grow was destroyed.