When the north-eastern blows the way it did on Wednesday, the town closes down until the storm blows itself out to sea. 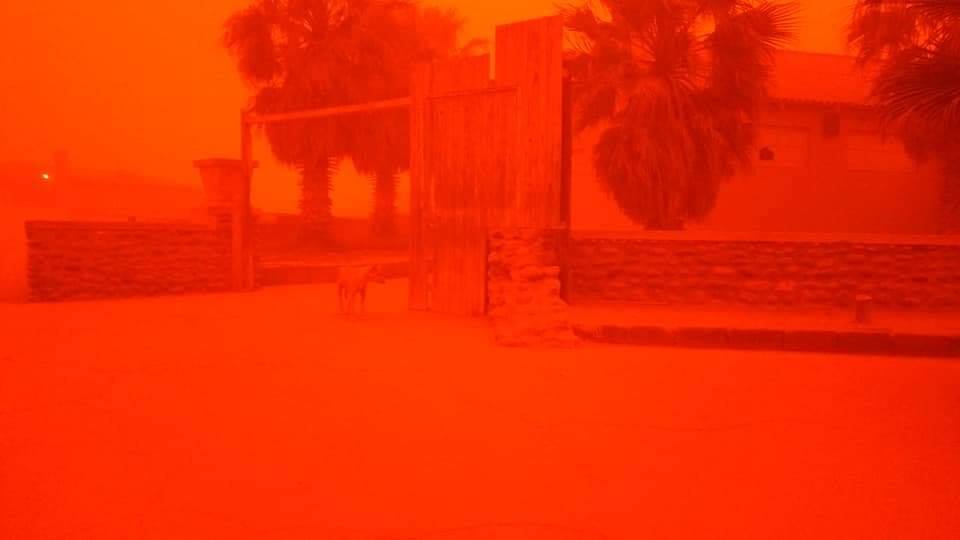 Alexander Bay turned into a swirling red ball of dust on Wednesday as a severe sandstorm hit the town on the banks of the Orange River in the Northern Cape.

“This morning when I woke up it was so red, and it was raining at the same time,” local pastor Carel Wiggett said.

“You cannot believe what it looks like – the sand hung over the town and now the wind is blowing.”

He said people had tried to go to work, but had to turn back.

“People can’t see the white line in the street,” he said.

Having become used to sandstorms during the 30 years he has lived there, Wiggett said the storms of the past two years had been particularly dramatic.

When the north-eastern blows the way it did on Wednesday, the town closes down until the storm blows itself out to sea.

People with chest or sinus problems struggle as the dust creeps through every little nook and cranny, and settles itself inside houses too.

When the storm passes, out come the vacuum cleaners and the feather dusters.

He added that no aircraft could land at the airport, because it turned into the “scareport” during sand storms, and pilots diverted to other landing spots.

“If you’re expecting someone, you hear the engines in the air, and then you just hear them changing direction, and you just have to wait.”

He added that there were also extreme variations in temperature during the storms, with it being cool inside the house and over the 30°C outside.

The SA Weather Service warned that the storm would continue into Thursday morning.