AmaZulu captain, Thapelo Nyongo, has apologised to the team’s fans for their failure to win promotion to the Absa Premiership this season. 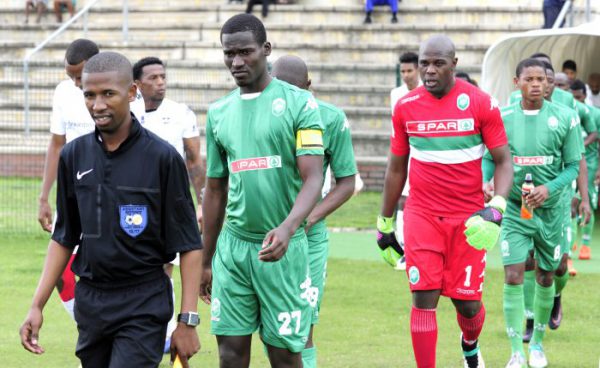 Thapelo Nyongo leads his team onto the field of play. (Gerhard Duraan/BackpagePix)

Usuthu came close to making the promotion play-offs but a 1-0 defeat to FC Cape Town put paid to their chances.

“From us as players ours is to thank the chairman, management, technical staff and the supporters for all the efforts. I would also like to apologise to everyone we have disappointed in the process,” said the 21-year-old defender after Sunday’s match.

He said the match against African Beasts was scrappy and they were lucky to have been able to convert the one chance they got to get away with an important win.

“It is really hard to even think about that game. There are no excuses for us for not winning the match but tried, they utilised their chance and it was scrappy,” said Nyongo.

He further described their season as resembling a roller-coaster ride marked with highs and lows and added that he is proud of the team’s efforts.

“It was a roller-coaster season for us. It is a pity that we were unable to give the team the 85th birthday present it deserved. It’s just heartbreaking as we have been through a lot as a team and lost a brother in the process,” he said referring to the death of Usuthu’s long serving kit man, John Ndlangisa who died last month.

“One thing I can say as captain is that I am proud of my mates for all their efforts, hard work and commitment to the course. It was such an honour to lead the team. To our supporters, thank you for being there for us throughout and we are sorry for disappointing you,” he said.