Former Orlando Pirates striker James Mothibi has assumed the role of being a father-figure to upcoming football players who dream of striking gold in the Absa Premiership in the near future. 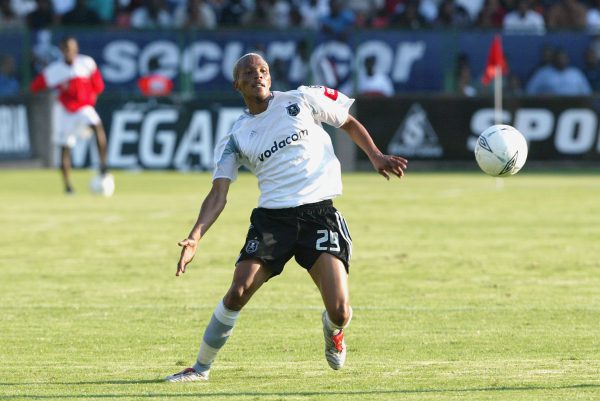 Mothibi says he is still as dedicated to football as he was when he was still playing for Pirates and African Wanderers. Since retiring from playing, he has coached a team from his home town of Warrenton in the Northern Cape, helping them gain promotion from the Castle League to the ABC Motsepe league, before starting his own academy, the James Mothibi Sports Development Academy.

“I view myself as a football father right now, that is what I do. I want to help as many players as I can to reach the top, a lot of players have talent and need to be developed. After helping Young Stars (from Warrenton) gain promotion I decided to give other guys from my area a chance to coach the team … now they (Young Stars) could play in the National First Division because they are in the play-offs under the guidance of another coach. I’m happy I was part of building the foundations.”

Mothibi is waiting for another shot at getting a Caf B license, after he failed to get it the first time around. The former striker learned a lot from his first try an is prepared to rewrite the test, which he will write in Upington before the end of the year. While waiting for Safa to release the dates for rewriting, Mothibi is also working as a motivational speaker for LoveLife in the Northern Cape, and is a scout and a selector for the Castle provincial team in the same province.

While at Wanderers, Mothibi was conned by a street-smart football agent, when he had to sign a contract with the now defunct club. Now he wants to help others avoid such circumstances.

“I know what its like when you are a young talented player and trying to get in and now you have to deal with agents. Most of them cheat these young boys, I was also cheated so I know.

“I try to make sure that they settle in okay at a club, so I will have a conversation with the coach and the owner, when I see a young man I will recommend him to Pirates or to Gavin Hunt. I don’t scout for money. I want to make sure that these players don’t find themselves being cheated by the agents.”