Football was our saviour – Chiefs legend

Football is central to the souls of the people, says former Kaizer Chiefs defender David Nyathi, who likens the beautiful game to a religion which South Africans were devoted to. 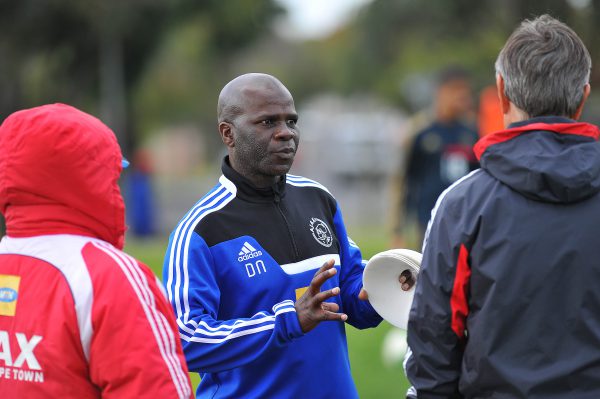 Football was a form of escape for black people living in townships during the apartheid era in the ’60s and ’70s and Nyathi bemoans this lost heritage in modern football.

Nyathi (left) has been involved with South Africa’s Masters and Legends for the past four years as the organisation’s national secretary general.

The 49-year-old believes former players understand the identity of our football and should be given a platform to teach it to the current generation.

“We have set up structures all around the country, we are doing some work with Safa for their “Come Show Your Love” campaign, and our legends are heavily involved in that projects. It involves kids and their parents,” said Nyathi.

“We think former footballers have been completely ignored in terms of their capacity, the role they can play in society and imparting their knowledge to enhance our football. I think they are an asset that the leadership needs to look at to grow our football, looking at where our game is.”

The dwindling number of supporters in the stands is a cause for concern for a man who played football at a time when there was no such thing as a small game played by minors, Nyathi says the dwindling of the identity of South African football over the years has caused fans to stay away from the grounds.

“There is a lot of money being put into football, but unfortunately there is no show. That is a big problem, and bringing back former footballers can help bring back the connection between the supporters and the players.

“They need to understand that football played a role in the apartheid era, it was the people’s game, it played a central political role in ensuring that if we were in pain on one side, we needed to have joy on the other side, it’s what we did and who we were. The players need to continue that legacy.”

The former Ajax Cape Town assistant coach slammed players for not working to develop a distinct style which makes a footballer different from the next one.

“Nyathi has called for bravery from coaches entrusted with leading local teams when it comes to making decisions which are at times against what management want, but will ultimately pay dividends.

“When you have 11 players doing the same thing, you ask what’s unique about it, what is entertaining about it?

“We need variation, we can’t have trap and pass, trap and pass, we need to see uniqueness from our players and that is the entertainment element of our football, we don’t have that, people look at our football and they don’t go to the stadium, this means our product is not attractive.

“You will be rejected for your truth, it’s not new if you are seen as someone who talks or knows too much (as a coach), it is an indication that you are going in the right direction because despite what you say, some people don’t want to hear about it, maybe they feel attacked, because they are doing something contrary to what should be done, you should feel good,” he said.

Nyathi has called for different sectors of football to consider having forums where the future of South African football is discussed as well as finding a way to improving it by restoring its identity.