AmaZulu's loss to Baroka and Pirates' draw with Stellies basically means Masandawana are home and dry. 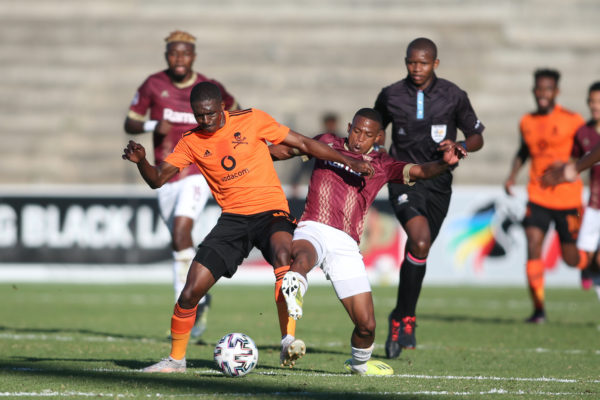 Abel Mabaso of Orlando Pirates is challenged from behind by Ashley du Preez of Stellenbosch FC on Tuesday. The game ended 0-0. Picture: Shaun Roy/BackpagePix

Mamelodi Sundowns will win the DStv Premiership title if they beat SuperSport United in a Tshwane derby on May 26, after Orlando Pirates played out a goalless draw with Stellenbosch yesterday, while AmaZulu suffered a surprise defeat at home to Baroka FC.

Pirates were never really in the title race anyway, to be fair, as they started this game 15 points behind Sundowns, with five games left to play, and a vastly inferior goal difference.

AmaZulu remain seven points behind Sundowns, with three games left, but this defeat to Bakgaga effectively ended their chances, Richard Mbulu’s 38th minute goal enough to give the away side three points at the King Zwelithini Stadium.

Josef Zinnbauer’s Buccaneers were lucky to walk away with a point in this tie, after their dismal dismal display, which saw Stellenbosch dominating the game, especially in the first half but they failed to take their chances.

Stellies almost had a brilliant start to the game, after a Jayden Adams’ 5th minute free-kick was pushed back into play by Pirates ‘keeper Wayne Sandilands. However, the follow up from Nathan Sinkala hit the post, before Ashely du Preez’s attempt from the rebound went over the bar.

Pirates, meanwhile, knocked the ball around as they looked for a way to break the Stellies back four,  but the home side was mainly solid at the back.

They did almost gifted Bucs an easy goal after goalkeeper Lee Langeveldt failed to clear a back pass, but defender Zitha Macheke was quickly to the rescue, keeping out the danger.

Before going half time, Du Preez got two brilliant chances. The striker failed to take a shot a goal after beating Pirates defenders for pace and then he was set-up inside the box with only the keeper to beat, but he squandered the golden opportunity.

The home side finished the first half dominant, but failed to find the back of the net as the teams went into the the break goalless.

The first few minutes of the second stanza saw Deon Hotto with a chance to test Langeveldt from a set-piece. But, his well-taken struck the crossbar.

In the 63rd minute, another free-kick to Bucs, this time taken by Gabadinho Mhango looked to be going into the net, but Stellies keeper Langeveldt pulled out a great save.