Radiopane is eager to make his mark in the first team. 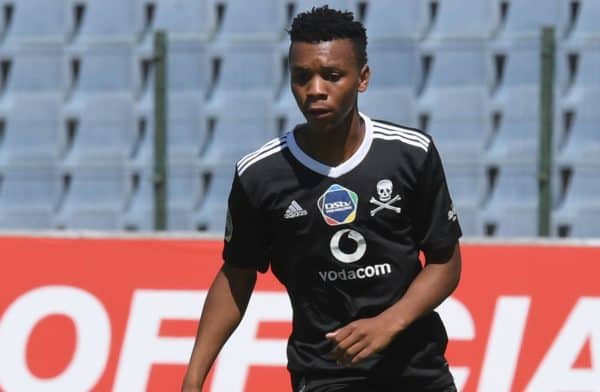 The name Boitumelo Radiopane started making waves during last season’s DStv Diski Challenge rewired, with the striker scoring goals week in and week out for the Buccaneers reserves, which earned him a lot of admirers, but the youngster reveals that it wasn’t easy getting into the first team.

And with plenty of players raising their hands to be given an opportunity for the senior side, one really needs to be a very special player, and special was Radiopane, whose eye for goals made him one of the key players in the Bucs reserves and he subsequently rewarded with a promotion to the first team for this season.

“My journey started in Johannesburg when I played for School of Excellence at the age of 13-years old. Then I went on to play for the national team (Amajimbos) when I was 16-years old. I came to Orlando Pirates in 2019 after playing with the national team in Mauritius, that’s how I came to Pirates. Coming to Pirates was not easy, I started playing in the SAB league, then, coach Mandla Qhogi (reserve team coach) selected me to play for the MDC (now called DDC) team. Things started to get easier after that, I managed to achieve a lot of things,” said Radiopane on Pirates TV.

Having scored six goals for Pirates in the Diski Challenge last season, Radiopane is certainly eager to make his mark in the first team, where he is yet to get competitive football action having only played in the pre-season game Carling Black Label Cup against kaizer Chiefs, Radiopane is determined to keep on learning.

“Obviously as an individual I want to achieve more with the team. But what I would say is that being in the first team is special to me. I am hoping to get more and more experience from the guys. And with my focus and determination, everything is possible.”

Pirates host neighbours Swallows FC in the DStv Premiership at the Orlando Stadium on Saturday, and maybe Radiopane might see himself in the match-day squad.