The Bucs register a first three points of the season. 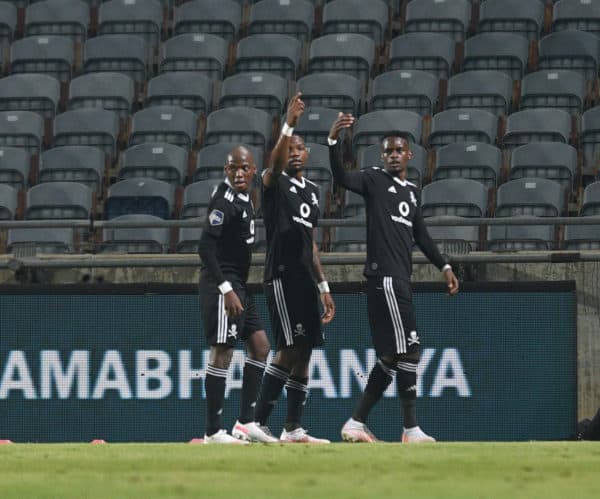 Orlando Pirates managed to secure their first victory of the season, beating Swallows FC 1-0 in a DStv Premiership clash at the Orlando Stadium on Saturday.

Tshegofatso Mabasa game off the bench to get the vital goal 12 minutes from time, and boost caretaker head coaches Fadlu Davids’ and Mandla Ncikazi’s claim for a permanent role.

The win is a morale booster for the Buccaneers, who had started the 2021/22 season in an unconvincing manner.

It was also revenge for Pirates, after Swallows knocked them out of the MTN8 quarterfinals in their opening game of the campaign.

Pirates had played to two draws in the league prior to this game, having been held to 2-2 draw by Stellenbosch FC and playing out a goalless draw against Marumo Gallants.

The results sees the Buccaneers going to five points after three games, while Swallows, who recorded their first loss of the season, are on four points after the same number of games.

In the 10th minute, Dillon Solomons’ pace beat Pirates right back Bandile Shandu, but his cross didn’t find anyone in the box, letting a good opportunity pass by for the Birds.

Swallows also came close to scoring in the 24th minute, but Bucs’ defender Thulani Hlatshwayo made an important block to make sure the scores remained level.

Both sides were trying to find a way to unlock each others defence, but none of their attempts were fruitful.

Towards half time, Vincent Pule looked to be racingclear on goal, but Junaid Sait was able to keep away the danger.

The sides went into the break with the score at 0-0.

Just 10 minutes in the second half, Pirates made some changes, bringing on Mabasa and Terrence Dzvukamanja for Deon Hotto and Kabelo Dlamini in their search for an opening goal.

Bucs’ changes worked, as the home side managed create a number of attacks. They were finally rewarded with a goal from a Tshegofatso Mabasa header, courtesy of a well delivered cross by Pule in the 78th minute.

Swallows did their best to get an equaliser, but Bucs remained solid at the back to make sure they took the three points.