A source close to Ramoreboli told Phakaaathi that his management have been in contact with two clubs. 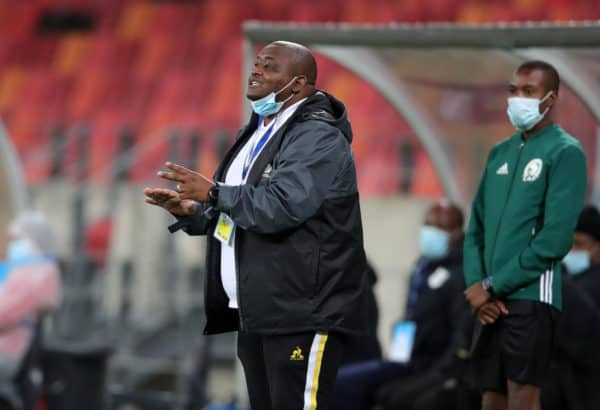 Morena Ramoreboli’s good work as a stand in Bafana Bafana coach has not gone unnoticed and two clubs have asked about his ability, but were told to wait for him to finish his national team duties first.

A source close to Ramoreboli told Phakaaathi that his management have been in contact with two clubs – one in the GladAfrica Championship and one in the ABC Motsepe League about a possible move.

“They told them to wait because they don’t want to disturb him while he was with Bafana. He (Ramoreboli) is currently employed by Safa as an assistant to the junior national teams coaches. He will have to decide if he wants to leave and get back to club coaching or not.

“Black Leopards have expressed their interest in Ramoreboli as they are looking for a coach to help them get back to the DStv Premiership. I have heard that Steenberg United in Cape Town have also shown an interest. We will know this week when he has returned from Bafana what happens,” said the source.

Phakaaathi reported last week how Leopards’ approach for Mabhuti Khenyeza was squashed by Golden Arrows boss, Mato Madlala who asked that he be allowed to continue at her club for at least another season.

Steenberg were relegated from the Championship last season and will be campaigning in the ABC Motsepe League in the Western Cape, and have vowed to make a quick return to the paid ranks.

Ramoreboli led Bafana to the Cosafa Cup glory on Sunday after the national team edged Senegal 5-4 in a penalty shootout. The game had to be decided on penalties after the game ended in a goalless draw at the Nelson Mandela Bay Stadium in Gqeberha.

Veli Mothwa won the battle of the goalkeepers and Bafana Bafana lifted a first Cosafa Cup title in five years.

Mothwa and Senegal ‘keeper Pape Ndiaye, captains of their countries too, both saved one penalty in the shoot out, but Mothwa also scored a penalty past Ndiaye, while the latter’s attempt, the 12th penalty of the night was ballooned over, allowing Bafana to celebrate.