Sunday's 4-0 win over Crystal Palace at the Etihad lifted Pep Guardiola's men above champions Liverpool and within two points of leaders Manchester United, with a game in hand. 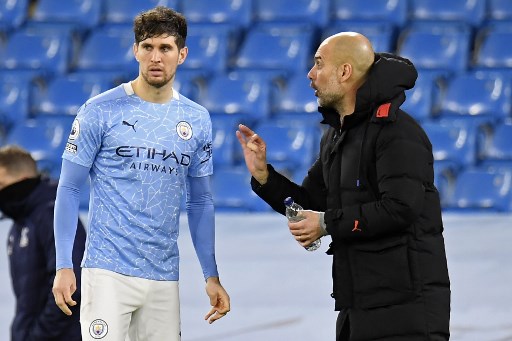 Sunday’s 4-0 win over Crystal Palace at the Etihad lifted Pep Guardiola’s men above champions Liverpool and within two points of leaders Manchester United, with a game in hand.

In all competitions Pep Guardiola’s side are unbeaten in 15 games and have kept clean sheets in 12 of them.

They are also through to the League Cup final, the FA Cup fourth round and the last 16 of the Champions League.

Asked to describe the mood among the squad, England defender Stones said: “I think quietly confident — but no-one really gets ahead of themselves, no-one looks too far, which is a great quality to have.

“In previous seasons where we have won the league we have never looked further than the next game and that’s all we can affect and all we can prepare for.

“We keep that mentality and hopefully we can keep on this winning run.”

Stones, who scored two of the four goals against Palace, has been outstanding in City’s recent run of form.

The 26-year-old fell out of favour last season and appeared to be well down the centre-back pecking order when the current campaign began.

But with Aymeric Laporte and Nathan Ake affected by form and fitness issues, and Eric Garcia indicating a desire to leave, Stones has grasped an opportunity to shine alongside new signing Ruben Dias.

Of the 10 matches he and Stones have started together, City have won nine and conceded just one goal.

“I’ve been wanting to add goals to my game,” said Stones, who also scored in the League Cup semi-final win over United earlier this month.

“It’s a collection of things that have got to come together and I’m really pleased, it’s a weight off my shoulders, my first ‘two’ for City.”

Guardiola praised Stones for his performances this season, saying he “deserves the best”.

“Confidence is everything,” said the Catalan. “He won his confidence for himself. As managers, we can’t give confidence.

“He started to play alongside Ruben and they’ve played really well.”