The two coaches have met several times as coaches in the Madrid derby, while their head-to-head rivalry goes back to their playing days. 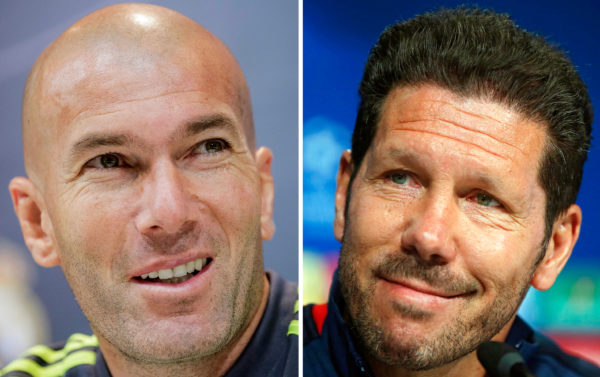 Zinedine Zidane and Diego Simeone will take their places in the Wanda Metropolitano dugouts for the Madrid derby today with a long history of rivalry between the two.

The French and Argentine icons have met in the Madrid derby on 13 occasions, 12 times as coaches and once as players. Beyond the Spanish capital, they also faced off against each other a further eight times during their playing days in Italy where Zidane played for Juventus and Simeone represented Inter Milan and Lazio.

Their one Madrid derby meeting on the pitch

These two players’ high-profile careers in the Spanish capital only just overlapped, providing only one direct derby match-up, in December 2003. Neither will forget the game in a hurry; it was the night that the great Ronaldo Nazario scored the fastest goal in the fixture’s history (16 seconds) to send Real Madrid on their way to a 2-0 win.

Simeone played at centre back that night instead of his usual midfield role. Zidane set up in the middle of the park and played a part in the build-up to the goal, which neither Simeone nor his former long-time coaching assistant German ‘El Mono’ Burgos, Atleti’s goalkeeper that day, could do anything about.

That encounter turned out to be the final meeting between Zidane and Simeone as players and tilted the balance in favour of the Frenchman. Their final head-to-head record as players, taking into account their appearances in Serie A, ended with four wins for Zidane, two draws and three wins for Simeone.

The rivalry moves to the dugout

That 2003 derby came at a time when Real Madrid completely dominated the fixture. Real Madrid went from 1999 to 2013 without losing to their neighbours but Simeone was the man to turn the tide, leading his side to victory in the 2013 Copa del Rey final. From that day on the initiative looked to be in Atleti’s hands, and Zidane actually lost his first derby as Real Madrid coach: a 1-0 reverse at the Bernabeu in 2015/16.

Today Zidane has the edge with six victories, four draws and two defeats in his head to head with Simeone. That second defeat, though, didn’t really feel like a loss for Zidane as it came in the second leg of their 2016/17 Champions League semi-final: Real Madrid advanced to the final on aggregate anyway.

The European Cup final between these two tacticians also fell in Zidane’s favour, as Real Madrid won the 2015/16 Champions League final in Milan against their city rivals on penalties.

Interestingly, the four draws between these coaches have all come the league. There have been eight LaLiga Santander meetings between the coaches, with the first being an Atletico win, the second going to Real Madrid win, then four finishing with the spoils being shared before Los Blancos edged the two last derbies: 1-0 in the Matchday 22 of the season 2019/20, and 2-0 in the first derbi this season.

It promises to be another tight affair when these two giants meet again on March 7th, the 14th meeting between these two LaLiga icons – in particular with LaLiga title on the table and Atleti riding high in the table as standalone leaders.